by Musa Umar Bologi
in Investigations, Lead of the Day
0 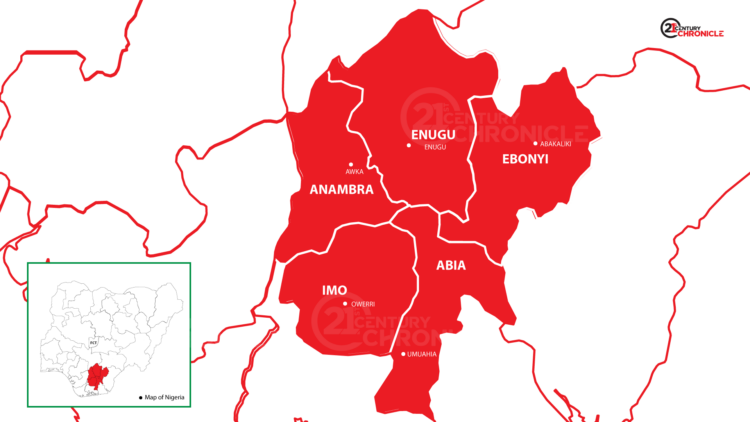 Eight traditional rulers have been killed and four abducted by gunmen in different parts of the South-east of the country in the past 12 months.

An investigation conducted by 21st CENTURY CHRONICLE, through reported cases in the media, has revealed that the monarchs were killed or abducted in their palaces, meeting venues, as well as on transits.

The South–east region has in recent times been plagued with rising insecurity occasioned by the hostility of the proscribed secessionist Indigenous People of Biafra (IPOB), against the security forces and perceived allies of the Federal Government in the region.

Our investigation revealed that Imo State, which was the highest hit by the activities of IPOB in the region, also recorded the highest casualties.

The armed men invaded the venue of the meeting in an SUV and a Sienna bus at about 2 pm on Boxing Day, and shot dead the traditional ruler, and abducted three other people identified as Emmanuel Nwobodo, Onyema Edeh and Sunday Onunze.

The royal father was appointed by his community on December 26, 2019, and was killed a year after his installation.

Hours after the killing, angry youths in the village attacked the homes of some indigenes of the community alleged to be behind the murder, and burn down their houses and vehicles.

The monarch was shot head near the Ezu Bridge in Otuocha community and dragged into the nearby bush.

The 62-year-old traditional ruler was among the 12 traditional rulers in the state that were suspended last year by the state Governor Willie Obiano, for visiting President Muhammadu Buhari in Abuja in the company of the billionaire oil magnate, Prince Arthur Eze.

Following the visit and subsequent suspension, his subjects dethroned him and crowned another traditional ruler.

The state police command confirmed the incident, but the perpetrators have not been brought to justice.

The gunmen stormed a meeting and opened fire, killing the traditional rulers.

The incident created fear in the whole of South-east region, especially as the Police, as always the case in similar incidences in the region, could not apprehend those responsible for the atrocity.

The monarch who is the father of a former deputy governor of the state, Prince Eze Madumere, was abducted while on transit to attend the burial of his wife’s grandmother.

The media adviser his son, Uche Onwuchekwa, who confirmed the incident, said the 89-year-old monarch was abducted by armed men and taken to an unknown destination.

As the storm was beginning to settle from the killings of the five monarchs in October, on December 10, gunmen gruesomely murdered the traditional ruler of Atta Ancient Kingdom in the Njaba local government area of Imo State, Edwin Azike.

He was abducted by his murderers at his palace at about 2:30 am on Thursday, December 9.

On the same day, armed men kidnapped the traditional ruler of Mbutu in Aboh Mbaise local government area of Imon state, Eze Damian Nwaigwe. The monarch was kidnapped from his palace in the early hours of Thursday but was lucky to be rescued two days later.

However, the traditional ruler of Atta Ancient Kingdom, Edwin Azike, was not so lucky, despite the promise made by the Police spokesperson in the state, Mike Abattam, that he would be rescued unhurt, On Friday the body of the monarch was found dead in the market square.

After the incident, Imo State Governor Hope Uzodinma promised to bring the perpetrators to book, and urged indigenes to remain calm as government is “on top of the situation.”

But, the incident that happened on December 12 showed that neither the state government nor security agents were really “on top of the situation,” as gunmen invaded two separate communities in the state and abducted their traditional rulers – Acho Ndukwe of Amagu Ihube and Paul Ogbu of Ihitte Ihube, both in Okigwe local government area of the state.

The spate of attacks on traditional rulers in the South-east by gunmen continued unabated, despite government promises and assurance to residents of the region.

Sources said the monarch was kidnapped at about 8:30 pm on Tuesday, during a meeting with his kinsmen at the Nkwo-Umuezeala market square.

They said the armed men stormed the venue of the meeting and ordered the monarch to enter their vehicle, which he obeyed. And his whereabouts have not been known since then.

The apex Igbo socio-cultural group, Ohanaeze Ndigbo had said on Wednesday that the situation in the region was complex, but while it was worried about the development, it lacked enforcement capacity to do much, but only persuade.

Spokesperson of the group, Chief Alex Ogbonnia, said while speaking to journalists that the group had been engaging the youths and the government, it had also mandated the South-east security outfit, Ebubeagu, to contain the incidents.

Ogbonnia also said, “some of these killings are being sponsored by external forces for their selfish interests across Igboland.”

Amechi urged the duo to resolve their problems in the interest of peace in the state, adding that a majority of the crisis emanates from t Orlu and Ideato zone where the duo hailed from.