SPECIAL REPORT: Inside story of politicians who have been contesting elections without success 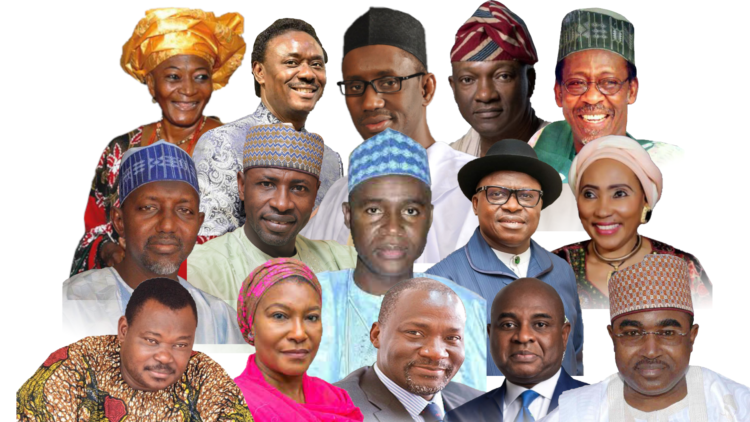 Despite failing to make a breakthrough in their aspirations each elections year, they are undeterred and keep returning to book spaces in the lists of aspirants and candidates of their respective political parties.

Each election year, since the beginning of the Nigeria’s fourth republic in 1999 and even beyond, their names continue to make up the list of contenders for various positions in their states and at the center.

They have become synonymous with Nigeria’s electoral system.

In this report, 21st CENTURY CHRONICLE takes you through the struggles of those now tagged as “serial contenders” in a suffocating Nigeria political space.

Sarah Jibril stands out. She made her foray into Nigeria’s murky political waters at a time women stood on tiptoes to take a glimpse at the arena.

She delved into active politics 40 years ago, precisely when she contested for a senatorial ticket in her home state of Kwara in 1983.

When she lost the bid, she was offered a cabinet position in Kwara as Commissioner for Social Development, Youth and Sports.

In 1992, Mrs Jibril shocked analysts by vying for the highest office in the country, becoming the first female in Nigeria to dare the status quo. She lost the primary of her party, coming fourth.

Unfazed by her loss, Mrs Jibril declared interest for the seat again in 1998 on the platform of the Peoples Democratic Party (PDP) but again lost in the primary, with Olusegun Obasanjo ultimately winning the presidency.

Ahead of the 2003 general elections, Mrs Jibril joined the Progressive Action Congress (PAC), picking its presidential ticket, but lost to Obasanjo again. She later returned to the PDP where she also declared for the party’s presidential ticket but got just four votes in 2007.

When she ran for the ticket again in 2011 ahead of the general elections that year, she got just a vote.

Popularly known as Chris Okotie, a televangelist and pastor he first ran for the presidency on the banner of the Justice Party (JP) and lost in the 2003 elections.

He founded his own party, Fresh Democratic Party (FDP) and ran on its platform in 2007. He ran again on the same platform in 2011 and lost to President Goodluck Jonathan.

His ambition to return to the ring for the 2015 elections was stalled by litigation over the deregistration of his party.

Marwa is a retired military

officer and politician. In 2006, he ventured into politics and vied for the Peoples Democratic Party (PDP) presidential ticket in 2007.

He later threw his weight behind Umaru Musa Yar’Adua who eventually won the presidential election.

In 2011, he was the governorship candidate of the Congress for Progressive Change (CPC) in Adamawa but came third behind ACN’s Markus Gundiri and PDP’s Murtala Nyako, who won the election.

He defected to the PDP, but returned to APC in 2015 and worked for the victory of President Muhammadu Buhari. From all indications, Marwa will still contest.

Mohammed Dele Belgore, a lawyer and politician is a three-time governorship aspirant in Kwara State.

He joined active politics in 2010 and emerged the gubernatorial candidate of the ACN and contested on the platform during the 2011 governorship election in the state. He lost to the PDP’s candidate, Abdulfattah Ahmad.

Ahead of the 2015 elections, he left the merger party, APC, for the PDP where he joined the array of aspirants for the party’s ticket. However, Simon Ajibola later emerged the party’s candidate but APC’s Abdulfattah Ahmad was returned. He rejoined the APC afterwards.

In 2018, he stepped down his governorship ambition in the “collective interest” to support the incumbent Governor AbdulRahman AbdulRazak ahead of the 2019 general elections.

Ribadu is a former police officer and pioneer Chairman of the Economic and Financial Crimes Commission (EFCC).

He joined active politics in 2010 as a member of the Action Congress of Nigeria (ACN). In 2011, the party adopted him as its presidential candidate but he lost during the general elections to Goodluck Jonathan.

He joined the PDP afterwards and won the party’s governorship primary election in Adamawa State held in December, 2014.

However, in the main election, he came third. In 2016, he rejoined the APC and ahead of the 2019 elections declared intention to contest. In the primary of the party held on October 4, 2018, he again came third.

Jimi Agbaje is a pharmacist and politician. He contested the Lagos State governorship on the platform of the Action Congress (AC) in 2007, and then pulled out of the party for the Democratic Peoples Alliance (DPA).

He lost the election to Babatunde Fashola, the candidate of AC which he earlier dumped.

When INEC deregistered DPA, he defected to the then ruling PDP. He emerged the candidate of PDP having beaten major contenders in the race ahead of the 2015 governorship election but lost at the main poll to Akinwunmi Ambode of the All Progressives Congress (APC).

He secured the PDP ticket again ahead of the 2019 election but lost to the incumbent Governor Babajide San-Olu of the APC. Despite losing in the earlier two attempts, Agbaje seems to still have eyes on govrnorship.

Kingsley Moghalu is a politician, economist and lawyer. In 2019, Moghalu picked the ticket of the Young Progressives Party (YPP) as its presidential candidate, losing at the general elections when President Muhammadu Buhari returned to the country’s number one seat.

Moghalu announced early October that he would return to the rig in 2023 to vie for the presidency on the platform of African Development Congress (ADC).

Ireti Kingibe, wife of a former Secretary to the Government of the Federation (SGF), is an engineer and politician. Kingibe picked forms to contest for the Federal Capital Territory (FCT) senatorial race four times but failed to win the seat.

She first contested for the position on the platform of All Nigeria Peoples Party (ANPP) in 2003 and contested again in 2006 and 2011.

In 2014, she aspired to contest for the seat on the platform of the PDP but withdrew from the race and membership of the party after the House of Representatives primary, citing the irregularities that marred the exercise.

Timi Alaibe is a technocrat, businessman and politician from Bayelsa State. He is a former Managing Director, Niger Delta Development Commission (NDDC), and a former Special Adviser to President Goodluck Jonathan on Niger Delta Affairs.

Ahead of the governorship election in Bayelsa State, Alaibe defected to Labour Party from PDP to secure the party’s ticket in 2010. However, he defected back to PDP ostensibly on the advice of his principal, former President Jonathan.

However, he, along with others, were disqualified from the race.

In 2015, Alaibe defected to APC. He was due to contest for the APC slot ahead of the primary in 2015 when he suddenly withdrew from the race over the need to “sacrifice personal ambition for a more virile and united party.”

In 2018, he dumped APC and returned to the PDP ahead of the governorship election in November, 2019. He lost the primary to the incumbent Governor Douye Diri.

Jimoh Ibrahim is a lawyer, politician and businessman. He aspired to the Ondo Government House on the platform of the All Nigeria Peoples Party (ANPP) in 2003.

In 2016, Ibrahim and Eyitayo Jegede fought for the PDP governorship ticket with the crisis resulting in litigation. The Court of Appeal decided the case in favour of Jegede in November, 2016.

Ibrahim later defected to the ruling APC ahead of the 2020 governorship election in the state and supported the aspiration of the party’s candidate, Rotimi Akeredolu.

Adamu Maina Waziri, chieftain of the PDP, is a former lecturer and minister. He contested for the governorship position thrice in his home state of Yobe without success.

He was the PDP governorship candidate in 2007 but lost. In 2011 he picked the PDP nomination form alongside four others but lost the primary to Senator Usman Albishir.

Not deterred, he contested for the governorship seat on the same platform in 2015 but lost the main election to Governor Ibrahim Gaidam.

In 2011, he became the governorship candidate of ANPP but lost to Rabiu Musa Kwankwaso during the general elections. He defected to PDP and became its flag bearer ahead of the 2015 elections but lost the main election to APC’s Abdullahi Ganduje.

He left for the Peoples Redemption Party in 2018 preparatory for the 2019 election and became the party’s flag bearer. He, however, lost again to the incumbent Governor Abdullahi Ganduje.

Hajiya Mairo is a former Vice Chairman, Nigeria Textile and Garment Workers Association (NTGWA) and Chairman, Board of College of Health Technology, Kafanchan in Kaduna State.

She was a vice presidential candidate to Chris Okotie in the now defunct Justice Party in 2000. She was also a two-time gubernatorial aspirant in Kaduna State.

In 2011 she lost the primary to the late Governor Patrick Ibrahim Yakowa on the platform of the PDP.

Umaru, a businessman and politician, aspired for the governorship of Katsina State in 2011 on the platform of PDP but lost in the primary.

He later dumped the PDP for the All Progressives Grand Alliance (APGA) in 2014 to actualise his aspiration. He lost the governorship election in 2015, coming fourth in the poll as INEC declared APC’s Aminu Masari winner.

Tata defected from APGA back to PDP in 2016 but left the party after picking the form for its primary ahead of the 2019 governorship election.

Tanko is an activist and politician.

In 2011 he was the National Conscience Party (NCP) vice presidential candidate to socialite and journalist, Dele Momodu.

In 2019, he was the party’s flag bearer for the 2019 presidential election, but could not make any appreciable headway.

Ahead of the 2023 general elections, Tanko has been linked with the possibility of an emergence of a “third force” which is intended to displace the two major political parties in the country, APC and PDP. It is not clear whether he will have another shot at the presidency.

40% of Russian forces on Ukraine border in attack position – US