by Musa Umar Bologi
in Lead of the Day, Special Report
0 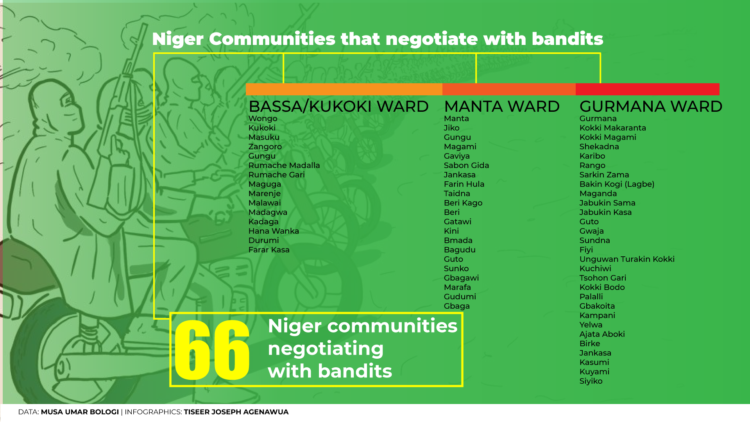 The recent withdrawal of Joint Security Task Force (JSTF) from some areas entangled with banditry in Niger state has revealed another dimension to the battle between the assailants and residents of the affected communities.

The military command had on April 2 announced the withdrawal of its personnel from the JSTF stationed in Allawa and Basaa communities in Shiroro local government area, after bandits attacked a military base in Allawa, killing seven security personnel, comprising five soldiers, one civil defence personnel and a vigilante.

21st CENTURY CHRONICLE reports that the Nigerian army also on April 22 shut down its camp in Zagzaga community in Munya local government area, following persistent bandit attacks on its bases which led to death of its personnel.

As a fallout to the withdrawal of the security forces the bandits have become embolden, invading and killing residents of the areas day–after–day without resistance.  The bandits are now fully in charge.

A forest of anguish

Until recently when it became bandits’ haven, Niger had enjoyed peace, with emerging agrarian communities and flourishing rural markets.

However, the Kamuku forest that defines its boundary with Kaduna and Zamfara states – designated centres of bandit activities – has since a decade became its woe. The forest has become a channel through which bandits migrate from the host states to Niger when the heat from security agencies became unbearable.

Today banditry in Niger has led to the deaths of hundreds and rendered thousands homeless in about 150 communities across five local government areas.

“I just heard that they’ve already hoist their flag in Kaure, which means they’ve taken over the territory and this is what I have been engaging the federal government with and unfortunately it has now gotten to this stage that if care is not taken not even Abuja is safe”, he said.

Bello also lamented loss of revenue due to bandit activities, as the affected areas are the food basket of the state and host vibrant markets.

21st  CENTURY CHRONICLE reports that the locals in the area had since 2018 raised the alarm about terrorists’ presence, but were ignored until recently.

The governor’s confirmation had sent a shiver to the Federal Capital Territory, Nigeria’s seat of power, as security operatives have since the pronouncement been on red alert.

21st CENTURY CHRONICLE gathered that Kaure, the community where Boko Haram had hoisted its flag, was the first to go into a peace deal with the assailants, but refused to make it public due to its sensitivity. The agreement, it was learnt, entails payment of certain amount of money, motorcycles, foodstuffs, and medical items. In return, the bandits agreed to allow residents to return to their homes and farms. They will also grant them protection against smaller criminal gangs.

It was also learnt that by end of April, 66 communities across three wards of Bassa/Kukoki, Gurmana, and Manta in Shiroro local government has negotiated with bandits.

“I don’t know the actual amount, but they paid some money. The amount that the bandits requested depend on the population of each community,” said Sani Abubakar Yusuf Kokki, Co-convener of Concerned Shiroro Youths. “Some of the communities have completed plans with the bandits, while others are still negotiating.

“Negotiations are done by a group of people, usually not exceeding five, from each community who will meet the bandits in a particular location and discuss the terms.”

The devil and the deep blue sea

Kuta, the headquarters of Shiroro local government is home to the famous Kuta market, known among residents of the state for cheap food and livestock. Unfortunately, the market is now a shadow of itself, as farmers domicile within the area no longer go to farms, hence no produce to sell at the market.

“Many of us have stayed in IDP camps for more than two years since the crisis intensifies,” Kokki said. “Our people have been feeding themselves, no assistance from the government. They need to survive, and the only way is to go back home and farm. So the negotiation is the last resort for us, because the government has left us to our fate.”

But it is not yet Uhuru even after payment of ransom, according to Malam Bello Manta, a retired civil servant and indigene of Manta District, who now lives at an IDP in Minna.

“The people of Bari village under our district went into negotiation with bandits and were asked to pay N3 million and a motorcycle, but were only able to pay N2 million,” Bello said.

“After paying the N2 million, they assumed the bandits will no longer do them harm so they sent one of their boys to the village to get them some foodstuff they had left behind. But on his way to the village, the bandits followed and killed him. So the fear now, is that even when we pay, are we sure they will not backslide in the agreement.”

However, the District head of Manta, Mamman Labaran Manta, confirmed that negotiations are going on between villages under his districts, but he has not been officially notified.

“If they come to me about the negotiation, I will support anything that will bring lasting peace to my district,” Manta told 21st  CENTURY CHRONICLE. “But our major concern now is feeding. Our people have left hone for more than two years now and some of them are in IDP camps all over the state, they need food, and government is not forthcoming.”

More vigilantes to the rescue?

On Wednesday, the governor, after a meeting with the new General Officer Commanding (GOC), 1 Division, Nigeria Army, Maj.-General Danjuma Ali-Keffi and community leaders at the Government House, Minna, said the state will employ more vigilantes and equip them with necessary equipment to curb banditry.

He said the local security outfits have been overstretched and overwhelmed, hence the need to strengthen them to compliment the efforts of the conventional security agents.

But as the government strives to find solutions, IDP camps continue to multiply in Shiroro and other local government areas, as bandit attacks increases; thereby prompting stakeholders to urged authorities to act quickly before the assailants invade the state capital.