by Shamsudeen Danmallam
in Features, Lead of the Day
0 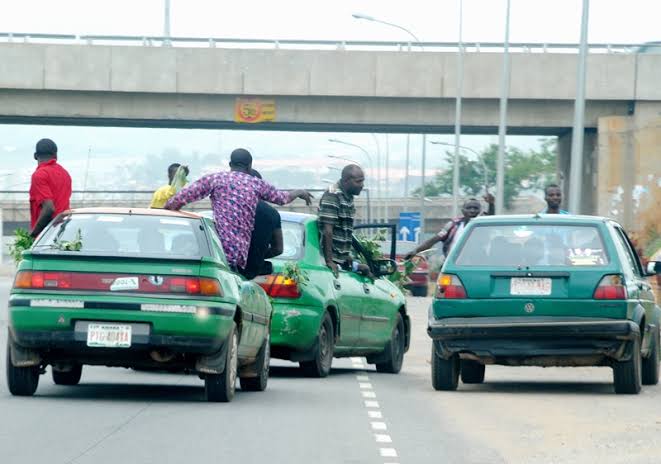 Motor touts, also known as “Agbero” (meaning tout in Yoruba) have become a menace in the Federal Capital Territory (FCT) Abuja, as they harass private car owners in the territory.

These individuals enter people’s cars and harass them over sundry allegations of wrong parking, no registration with motor union, among others whenever they stop to pick or drop passengers in locations the agberos have carved out as their areas of control.

These Agberos, 21st CENTURY CHRONICLE learnt, operate under various commercial motor unions, some of which are privately-owned but registered under the Abuja Municipal Area Council (AMAC).

Areas they mostly operate include Area 1 Junction, Berger Junction, Apo Bridge, Jabi Motor Park, Wuse Market and Banex Junction among others. One interesting discovery is that all these areas are under different unions.

A commercial motorist who simply introduced himself as Daddy, said before he started his cab business, he had to register with AMAC and buys daily tickets from most of these unions, depending on the route he’s operating on a particular day.

He explained that if he is operating along Wuse, Berger, Jabi, Airport Junction down to Life Camp axis, he buys one ticket as those areas are under one union and their office is situated in Jabi Motor park.

Daddy said he only buys their ticket because he is registered under AMAC otherwise, he would have had to register with the union because he operates in their ‘turf.’

Daddy also added if a motorist is not registered and is caught picking up or dropping passengers in these locations, he will have to pay a huge fine ranging from N10,000 to N20,000 thousand depending on the area or else, the person’s car will be impounded.

Due to the economic situation of the country, private vehicle owners in a bid to make a little money often use their vehicles to pick commuters when going to or from work, some of them have been ‘arrested’ or had their cars damaged by the agbero in the process.

Adnan Mundi is a Lawyer who comes from Kuje to Wuse 2 for work every day. When he started working at the law firm, he was a National Youth Service Corps (NYSC) member so in order to maximise his income, he picks passengers from Kuje to Berger every work day.

He told 21st CENTURY CHRONICLE that one day, while dropping off a passenger at the popular Berger Junction, three hefty men entered his car without proper identification and told him to come out of the car and when he complied, another person entered the driver’s seat while one of them instructed him to enter the car and they drove off without telling them who they were or where they were heading to.

Mundi recalled that they got to a place he later found out was their office in Jabi, by whch time they had already spoilt his car as the person who drove it was not a good driver.

He said it took several pleas from him that he was a corps member only trying to make ends meet and the intervention of one of the superior officers they met at the office that he was let off the hook.

“They could have kidnapped me if they wanted because there is no law regulating them. They are left unchecked and harassing people all the time even if you didn’t commit an offence,” he added

Narrating his ordeal, a resident, Chukwuemeka, said on his way to work, he have a neighbor a ride and has the “misfortune” of dropping him off at Beger Junction.

“The next thing I saw was men who came in their numbers and entered my car. They refused to let me go until I parted with a token which they called ‘pure water’ money.”

Another resident, Oludare Kehinde, an IT Engineer who has had two separate experiences with them, the first at Car Wash Bridge, Lugbe, when he stopped to drop off his friends he had given a ride.

“As soon as I dropped them, the Agberos entered my car and seized the key. I started quarreling with them and warned them that if anything goes missing in the car, they will be held accountable. It was one of the senior Agberos that came to settle the matter and ordered them to give me back my key,” he recalled.

In the second encounter which was at Apo Bridge, Kehinde said they seized his vehicle key in similar fashion after he dropped off a friend and it was the friend who pleaded with them and convinced that that he wasn’t a passenger before they let him go.

Sharing his experience, another IT Engineer, Olumide Adebayo, said it was a period of fuel scarcity and he saw a lot of stranded commuters around Banex Junction and wanted to help when one of the agberos, posing as a passenger, asked how much he was charging for a ride and he said it was free as he was only helping.

“The next thing I knew was that they arrested me for not having a permit for commercial motorists and took me to the Jabi office where I was made to pay for a 6 month permit.”

Victor Ameh also learnt his lesson the day he picked a woman and dropped her off at Area 1 roundabout. He was arrested and taken to their office and it took the intervention of an Airforce officer he called before he was let off the hook but not without parting with N1,000.

In his account, Onwere Isaac, an accountant, said he was coming from Wuye on a Saturday afternoon and someone was waving frantically at him as he drove by Banex Junction as if he was in distress and when he stopped, the person requested a ride to Gwarinpa and seeing that he was the only one there, he decided to help him but immediately the man entered the car, he put the car on park and removed his key and that was when it dawned on him that he was dealing with one of the notorious agberos.

Isaac said they took him to their office where they started deflating his car tyres and said he must buy their sticker worth N35,000 and after much pleading, they collected N20,000 and gave him stickers and papers of registration.

“These people are getting more powerful every day to the extent that even law enforcement officers are afraid of them,” he lamented.