by Shamsudeen Danmallam
in Lead of the Day, Power
0 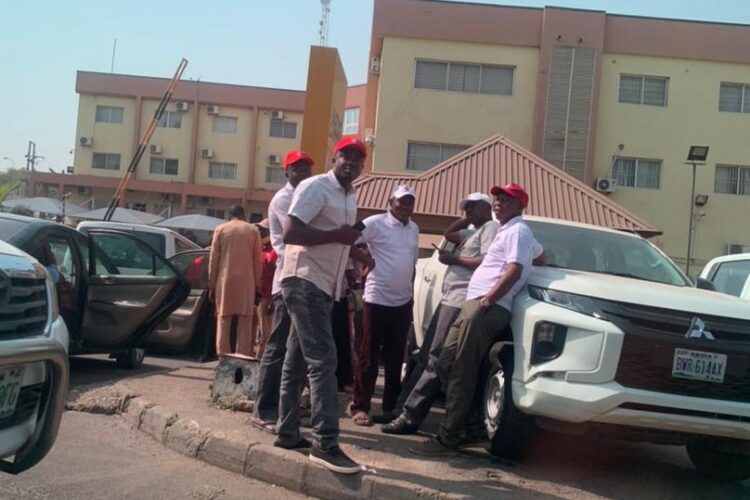 AEDC staff outside the headquarters

Staff of Abuja Electricity Distribution Company (AEDC) on Monday began a fresh strike over the sack of some senior officials of the company.

This is coming less than two months after the staff embarked on another strike that plunged FCT, Niger, Nasarawa and Kogi states in total darkness.

In December last year, AEDC workers had embarked on industrial action leading to the shutdown of the company’s facilities and disrupted power across FCT, Kogi, Nasarawa and Niger states.

21st CENTURY CHRONICLE investigations revealed that the Monday strike was due to the compulsory retirement of the power company’s General Managers by the new management.

The industrial action was conveyed to the staff via a memo titled ‘CALL FOR ACTION: PICKETING EXERCISE.’ Signed by ZOS Liaison, the memo states that “Following the directive to all the General Managers (GMs) to proceed on compulsory retirement by the Interim Management of Abuja Electricity Distribution company (AEDC), without following the due process, an action the Union view as highly Tyrannical and an attempt to commence the gradual downsizing of workers by style.

“This plan must be Resisted!

“You are to that effect directed to commence with immediate effect, the picketing of all AEDC offices including the Corporate Headquarters effective from Monday, 24th January, 2022, until the action is reversed.

Another memo cited by this newspaper instructed all AEDC and NUEE staff to converge at the company headquarters.

It states thus: “All staff of AEDC and NUEE members in Abuja should assemble at the company’s HQ tomorrow morning. The new management has sacked some categories of staff through phone calls and are mobilising the police to the HQ at this moment.

“We have passed through this road before, this is a little challenge. All members in FCT, transmission, Distribution and Generation are expected to be present.

“The GS is expected to address the rally.

“The struggle has started.”

21st CENTURY CHRONICLE reporter visited the AEDC Headquarters at Wuse Zone 4, where he observed that the corporate office was shut.

A staff of the company who spoke to our reporter said he was not coming to work Monday because of the union’s instruction. “I am at home as I am talking to you. No work today. We are on strike,” the staff, who craved anonymity, said.

The latest wave of strike was triggered by the decsion of the new interim management of the AEDC which sacked at least 17 General Managers (GMs).

The new  management came on board about after United Bank for Africa (UBA) which provided the finance to KANN Utility, the core investor of 60 percent stake in the AEDC in 2013, invoked its receivership clause over the incomplete settlement of the loans.

The takeover was ocassioned by the management crisis since November when the staff went on strike over non-payment of their entitlements and allowances.

After the takeover, Minister of Power, Engr. Abubakar D. Aliyu, had explained why management of the AEDC was cahnged, saying it was a decsion taken by the company’s shareholders.

In a statement he personally signed, Engr Aliyu said the electricity distribution company had been faced with operational challenges arising from a dispute between KANN Consortium, a core investor with 60 percent equity in AEDC, and UBA which lent the fund for the acquisition of the majority shareholding of the disco.

The minister said: “The attention of the Federal Ministry of Power has been drawn to publications in the print and electronic media relating to recent changes in the ownership structure and management at the Abuja Electricity Distribution Company Plc (“AEDC”).

“While noting that the news has largely been communicated out of context, the Ministry wishes to notify all stakeholders that the AEDC has, of recent, been facing significant operational challenges arising from a dispute between the core investors (KANN consortium) as owners of 60% equity in AEDC and the UBA as lenders for the acquisition for the majority shareholding in the public utility. The situation has currently deteriorated due to lack of access to intervention finances leading to a point whereby legitimate entitlements of the staff are being owed thus leading to service disruptions on 6th December 2021 within its franchise area. The Federal Ministry of Power has since taken the initiative to engage organised labour and electricity service has since been restored in the FCT and the states served by AEDC.

“The UBA, as a lender, and in exercising its rights over the shares of KANN Consortium in AEDC, has taken over the shares of the obligor in the AEDC. This takeover of the majority stake in AEDC by  UBA has consequently led to the reported changes in the management of AEDC. The changes in shareholding in AEDC and the appointment of an interim management for AEDC by the shareholders has been endorsed by the Nigerian Electricity Regulatory Commission (the industry regulator) and the Bureau of Public Enterprises (“BPE” as co-shareholders in AEDC).

“The Honourable Minister Of Power, Engr. Abubakar D. Aliyu, wishes to reaffirm the commitment of the Federal Ministry of Power for working with all stakeholders to ensure service continuity in all areas served by the AEDC.”