by Nuruddeen M. Abdallah
in Lead of the Day, Special Report
0 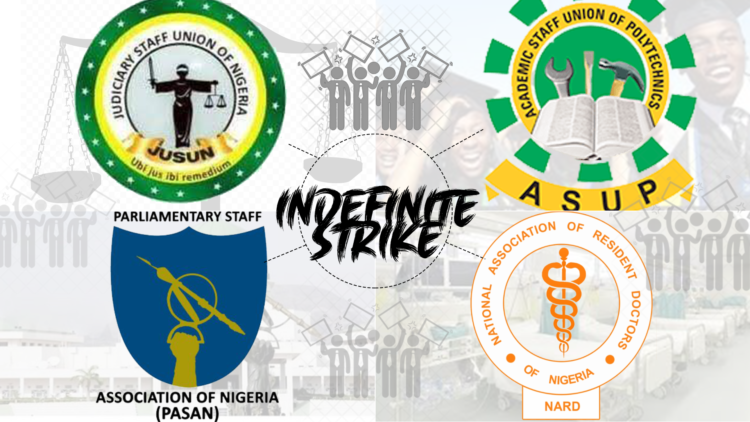 The industrial action by the National Association of Resident Doctors (NARD) which began on Thursday is already taking a toll on public health facilities across the country.

The doctors’ action has exposed many middle income and poor Nigerians who couldn’t afford exorbitant charges of the private hospitals, to perilous, if not lethal risks.

The latest entrant into the industrial action ‘business’ is the Joint Union of Judiciary Staff of Nigeria (JUSUN), which began strike on Tuesday, thereby shutting down court rooms across the country including the Supreme Court of Nigeria.

The judicial workers’ industrial action would further complicate the already turgid administration of justice  that moves at a snail’s speed.

While polytechnic students across the country are happy to be back to their classrooms after seven-month COVID-19-induced vacation, their teachers under the umbrella of the Academic Staff Union of Polytechnics (ASUP), have announced a strike beginning midnight Tuesday, thereby sending these students back to their homes.

Parliamentary Staff Association of Nigeria (PASAN) also began its nationwide strike on March 23, 2021, thereby crippling legislative activities at the 36 state houses of assembly in the country.

The national leadership of PASAN said it embarked on an indefinite strike across the 36 states and the Federal Capital Territory (FCT) over the failure of the federal government to implement the financial autonomy law of 2018.

The national president of PASAN, Usman Mohammed, said the strike became necessary following the unwillingness of the federal government to implement the Financial Autonomy Act of 2018 and Presidential Order 10.

“The union having exhausted all attempts aimed at asking for the implementation of the financial autonomy by the Federal Government after 21 days, 14 days and seven days’ ultimatums; at this juncture, the union has no other option than to direct our members to embark on an indefinite strike,” he said

Like their parliamentary counterparts, the judiciary workers have declared an indefinite nationwide to demand for the financial autonomy of the judiciary.

A circular signed by JUSUN’s General Secretary, Comrade Isaiah Adetola, it directed all states and zonal heads of the union to comply with the strike over financial autonomy.

JUSUN said at its last National Executive meeting on March 13, 2021 in Abuja, issued a 21-day ultimatum to the government to implement the financial autonomy of the judiciary with a threat that “failure of which JUSUN will have no other option but to resume the suspended national strike action.”

The association of Nigerian resident medics are on indefinite strike over poor wages, unpaid hazard allowances, among others.

President of NARD, Uyilawa Okhuaihesuyi, said the doctors’ demands include settlement of salary arrears, review of hazard allowance to 50 percent, and payment of death-in-service insurance for all health workers who died from COVID-19 while on duty.

Minister of labour and productivity, Dr Chris Ngige, has however, threatened to invoke the ‘no work, no pay’ rule on the resident doctors who embarked on strike

Academic activities have been grounded on Tuesday at all public polytechnics to make the federal government implement the demands of ASUP members.

President of the union, Anderson Ezeibe, announced this at a press briefing in Abuja Tuesday morning. The strike is coming despite a last minute attempt by the Minister of Education, Adamu Adamu’s Monday evening invitation to ASUP for an emergency meeting.

ASUP’s demands include non-implementation of NEEDS Assessment report of 2014 in the sector nor release of any revitalization fund to the sector despite assurances since 2017; non-reconstitution of governing councils in Federal Polytechnics and many state-owned institutions; non-release of the 10-month arrears of minimum wage owed its members, among others.