by Umoru Faruk Salifu
in Investigations, Lead of the Day
0 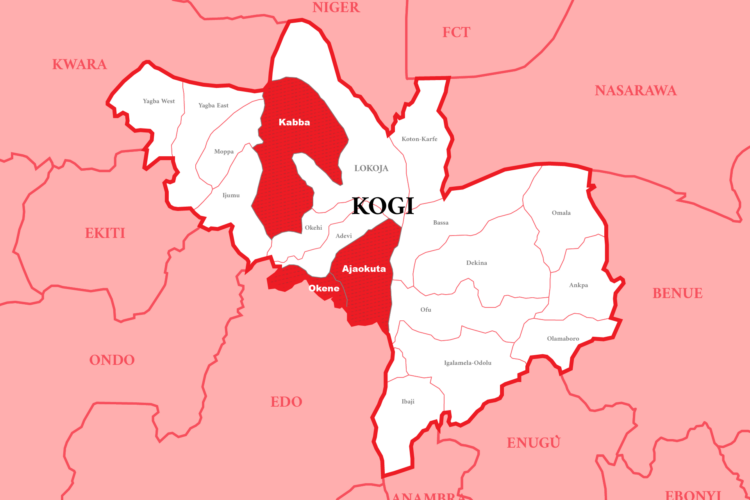 Eighteen persons including 10 security operatives had been killed and over 37 others kidnapped in several attacks by terrorists in Kogi state in the last six months.

The third one was in Okene which killed one person and also injured others on Thursday, June 3, 2022 at Idoji area of Okene when people, including masquerades, gathered to celebrate the annual Echane festival in Okene

A woman named Aisha Umar was killed and 11 other people injured in the first explosion at a drinking joint called Labi Beer Parlour at Lewu junction in Kabba; but there was no casualty in the second incident.

Earlier on February 19, 2022, gunmen had abducted 12 travelers along Itobe–Ajegu community in Ofu Local Government Area of Kogi State demanding a ransom of N30 million, typical of the scenario in North West Nigeria.

Another kidnapping occurred on April 22, 2022, as the contents of a bus were hauled away at Ijagbe community in Mopamuro local government area of the state. A passenger, Abdul Ohinoyi who said he escaped miraculously from the attacked bus, revealed that the kidnappers hijacked a passenger bus and abducted all passengers on board.

The Geregu-Ajaokuta route which leads to both Kogi east and south eastern Nigeria has suddenly been taken over by the unknown gunmen given the quantity of goods haulage and many travelers who travel on this route.

According to a driver who craves anonymity, that stretch of the road and its adjoining areas have become dreadful for motorists in the last two or three months. The driver who was loading passengers from Marararaba in Karu LGA in Nasarawa State heading for Ankpa in Kogi, a routine he does virtually every week, told the 21Sst CENTURY CHRONICLE that “gunmen and bandits ambushed motorists twice or thrice every week in the past three months or so.”

Another driver, Omale Ahmed revealed that the bandits have taken over the Ajaokuta-Geregu road in the last two to three months attacking motorists killing and kidnapping passengers.

He told 21st CENTURY CHRONICLE that “they strike any time. We are being warned to always leave the road from 6pm to 6 am.

“Lokoja to Itobe road and the Ogoribeje junction have become dangerous because of the activities of kidnappers and bandits around the areas,” the driver further said.

The drivers, however, praised Governor Yahaya Bello in the effort at checking the bandits on that route, they still urged him to involve as many stakeholders as possible in the drive to confront the criminals, because, he said the hoodlums have become very daring.

They said there is another route they can follow, but due to the fact that over 90 per cent of their passengers are mostly on the Ajaokuta-Geregu route, they have no choice but to still use it.

Chairman, Igala Youth Mass Transit, Adams Mohammed Sani said though none of his members has fallen victim of attack by the kidnappers, they are however overwhelmed by the latest news of increase in the activities of kidnappers on the route.

Sani said, “there was an attack two three weeks ago on the route in which passengers were killed. That incident has caused our people to be fearful now. We are calling on Governor Bello to beef up security on that road and the others within the state.”

Seven travelers including a doctor and a lawyer were kidnapped at Geregu-Ajaokuta road in the state on June 23 and on August 6, 2022 five persons including an Indian were killed and three other foreigners seized in Ajaokuta LGA in the state.

But before the August 6 massacre, there was this lamentation by an anonymous source who said “it is another black day for us in Ajaokuta. We are still mourning the killings of seven officers, and the kidnap of three children. Now another tragic incident has happened again.”

The Islamic State in West African Province (ISWAP) has claimed responsibility for the attacks on a police station in Adavi, Okene Local Government Area of Kogi State and in the Idoji area also in Okene on April 24 and Jun 5 respectively. Three police officers and two residents were killed in the two attacks

Just as the state was grappling with all these, then came the chilling news that the attackers who killed about 40 Worshippers in Owo Catholic Church in Ondo state are indigenes and residents of Okene and Okehi Local Government Areas of the state.

The identities of the Kogi state indigenes who allegedly took part in the Owo massacre as given by the Chief of Defence staff General Leo Irabor when he briefed top media managers on Tuesday August 9, 2022 include Idris Abdulmalik Omeiza, Momoh Otuose, Aliyu Yusuf and Awwal Omeiza.

On the indigenes of the state arrested in connection with Owo church massacre, Kogi State Commissioner for Information and Communication Kingsley Fanwo declared that the state government was aware of the development.

The commissioner agreed that recently there was security breach around Ajaokuta-Geregu axis when terrorists attacked and killed some people and kidnapped others among them foreigners, saying that but the government ordered security agents to move in to restore law and order.

“A meeting with all the stakeholders, community leaders, traditional rulers and law enforcement agencies in those places were immediately summoned in Government House and a lot of measures were taken and strategies were adopted.

“The measures were strategy. We may not let those things out, but measures were taken to reinforce the security architecture of that area.”