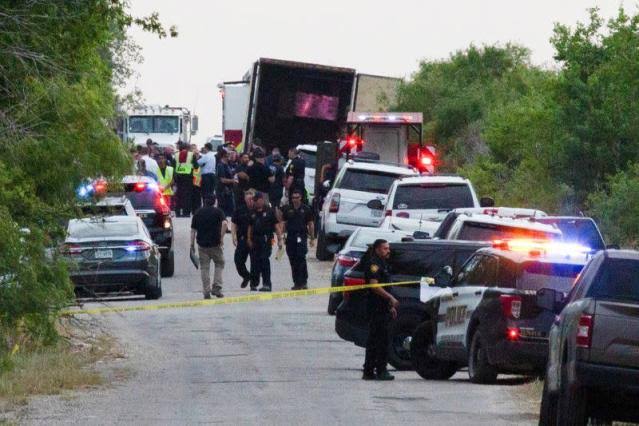 At least 46 migrants were found dead Monday in and around a tractor-trailer that was abandoned on the roadside on the outskirts of the Texas city of San Antonio in the US.

The grim discovery, one of the most deadly recent incidents of human smuggling along the US-Mexico border, is also one of the worst disasters involving migrants in the US in recent years.

A San Antonio Fire Department official was cited as saying that they found “stacks of bodies” and no signs of water in the truck, which was found next to railroad tracks in a remote area on the city’s southern outskirts.

It came five years after a similar deadly incident in the same central Texas city, a few hours from the Mexican border.

“At this time we have processed approximately 46 bodies that have been triaged and tagged and declared deceased,” San Antonio Fire Chief Charles Hood told reporters.

He said 16 people had been transported to the hospital alive and conscious – 12 adults and four children.

There have been a record number of migrant crossings at the US-Mexico border in recent months, which has sparked criticisms of the immigration policies of US President Joe Biden, a Democrat.

The state’s Governor Greg Abbott placed the blame for the deaths on Biden’s policies on Twitter, saying they “show the deadly consequences of his refusal to enforce the law.”

“The patients that we saw were hot to the touch, they were suffering from heat stroke, heat exhaustion, no signs of water in the vehicle, it was a refrigerated tractor-trailer but there was no visible working A/C unit on that rig,” Hood said.

Officials said three people were in custody over the incident.

San Antonio, which lies some 250 kilometers (150 miles) from the border, is a major transit route for people smugglers.

Temperatures in San Antonio swelled to a high of 103 degrees Fahrenheit (39.4 degrees Celsius) on Monday with high humidity.

In July 2017, ten migrants died after being transported in a tractor-trailer that was discovered by San Antonio police in a Wal-Mart parking lot. The driver, James Matthew Bradley, Jr., was sentenced the following year to life in prison for his role in the smuggling operation.

‘My Village People’ makes over N100m in box office