by Catherine Agbo
in Investigations, Lead of the Day, Special Report
0 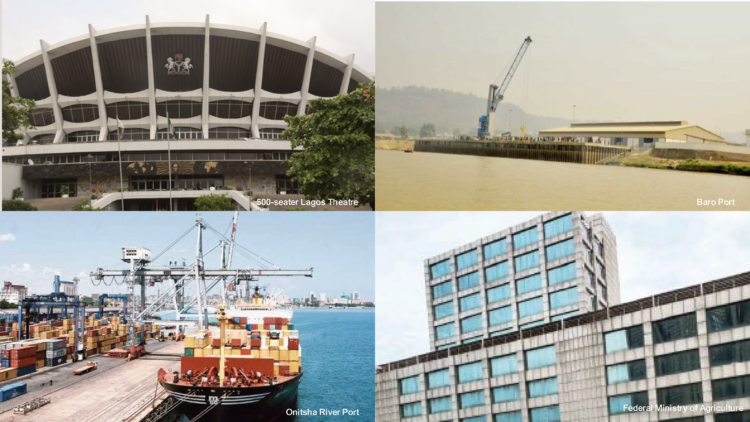 There are multiple multi-billion naira mega projects that remain inoperative years after their commissioning by top government officials across the country.

Investigations by 21st CENTURY CHRONICLE revealed that these projects were completed and commissioned by either federal or state governments at huge cost, amidst fanfare but are not functional.

Findings have shown that some of these projects have even been commissioned more than once but the commissioning remains the last major activity at the project sites.

The multi-billion Onitsha River Port in Anambra State was commissioned by the Managing Director of the National Inland Waterways Authority (NIWA), Dr George Moghalu, and expected to start full operations with vessels and barges calling at the river port, but no such activity has taken place there.

The port was commissioned in October 2020 and the NIWA MD had at the time stated that an international shipping giant, Maersk Line, had listed the port in its itinerary as port of final destination and that it had even started sending shipments to it. The shipping line had, however, denied the claim.

He said the aim was to break the jinx and encourage partnership with the Barge Operators Association and that the port was capable of handling 1,000 containers at once, which would then be transported by road to their destinations, which are nearer than Apapa and Tin Can port in Lagos or the Onne port in Rivers.

However, no container has been discharged at the Onitsha port seven months after the celebrated arrival of cargoes by barges.

Findings by 21st CENTURY CHRONICLE revealed that the commissioning in October 2020 was the third in history of the port.

The port was built under the administration of President Shehu Shagari in 1983 but remained dormant until 2012, when it was rehabilitated and commissioned by former President Goodluck Jonathan.

Baro Port, located in Agaie local government area of Niger State, was the first inland port in the country from where the first Governor-General of Nigeria, Sir Fredrick Lugard, disembarked prior to the amalgamation of the Southern and Northern Protectorates in 1914 after travelling from the South.

From that time, the port remained central to water transportation in the northern part of the country for a long time and would later be linked by rail line up to Minna, Kano and Lagos.

All that would however change years down the line.

In January 2019, there seemed to be a breath of fresh air and restoration of the port’s lost glory when the N6 billion project was commissioned by President Muhammadu Buhari at a colorful ceremony.

However, 34 months after it was commissioned, Baro Port lies abandoned with no activities taking place there, thus dashing the hopes of those who had looked forward to having a functional inland port in the northern part of the country for trade purposes, particularly.

21st CENTURY CHRONICLE gathered that ships cannot berth at the port as the River Niger is not dredged.

It was also gathered that there is no motorable access road to Baro Port as the only road leading there is in a deplorable state and a journey of 30 minutes to the port could take as much as four hours.

In April 2019, during a state visit to Lagos State, President Muhammadu Buhari commissioned the 500-seater Theatre, Oregun, alongside some other projects in the state.

Contract for the construction of the theatre and three others, was awarded in May 2017, to Terra Kulture Studio Limited.

The project commissioning, which was one of the highlights of the president’s visit, was said to have the potential to revive theatre culture in Lagos.

At the time of the commissioning, observers had alleged that the projects being commissioned, including the theatre were uncompleted and not ready for use, a claim the Akinwumi Ambode-led government had at the time, dismissed.

However, ever since the project was commissioned, it has been under lock, just as no record of its functionality could be found anywhere.

In February 2021, residents of Eke community, in Udi local government area of Enugu State, protested the commissioning of a road project yet to be completed in the area.

The N429 million road is an ecological fund project under the office of the Secretary to the Government of the Federation (SGF) and was commissioned by a Federal Government delegation to the area.

But the benefiting community said during their protest that the Enugu-Eke-Ogui Uno-Eke Eke-Obodo Amankwo-Oma Eke road, was yet to be constructed.

Bearing placards with inscriptions such as “Corruption Unlimited; ICPC where are you; EFCC where are you; Fraud Unlimited; Public Procurement Act Crucified,” among others, community members described the development as a monumental fraud which would be resisted.

The traditional ruler of Eke Community, Igwe Ezeoha 1 had at the time corroborated that no such road had been completed in his domain through the ecological fund office.

The Federal Ministry of Agriculture acquired a 10-storey property on Plot 1062, Herbert Macaulay Way, Central Business District in Abuja, from Messrs Efab Properties Limited at the cost of N7.075 billion.

This followed approval by the Federal Executive Council (FEC) after a request by the minister, Audu Ogbeh.

The building was to serve as the corporate headquarters of the ministry as it had operated from a single three-floor complex within the premises of the Federal Capital Territory Administration (FCTA) for over 20 years and spent over N400 million annually in rents for some of its departments.

However, since the building was acquired, it has not been in use as the ministry continues to operate from the FCTA complex while the newly acquired building wastes away.

Over three years after it was commissioned by President Muhammadu Buhari, the Kaduna Inland Dry Port is yet to become fully operational.

This has been partly attributed to the inefficiency of train services expected to serve the port.

Kaduna is the first full dry port in the country and was commissioned in 2018. The essence of the dry port is to decongest the ports and bring shipping services to the internal shippers. It is supposed to be a port of origin and destination.

The general manager of the port, Rotimi Hassan-Raimi, had in 2021 said the port will require five locomotives and 100 wagons to ensure full operation.

He also emphasised the need for incentives to be given to shippers to bring cargo to Kaduna instead of taking it to Lagos and other seaports in the south.

Why tricycles will continue to be part of us, by Muhammad Yakubu