SPECIAL REPORT: How top police officers were brought down by fraud cases

by Musa Umar Bologi
in Lead of the Day, Special Report
0 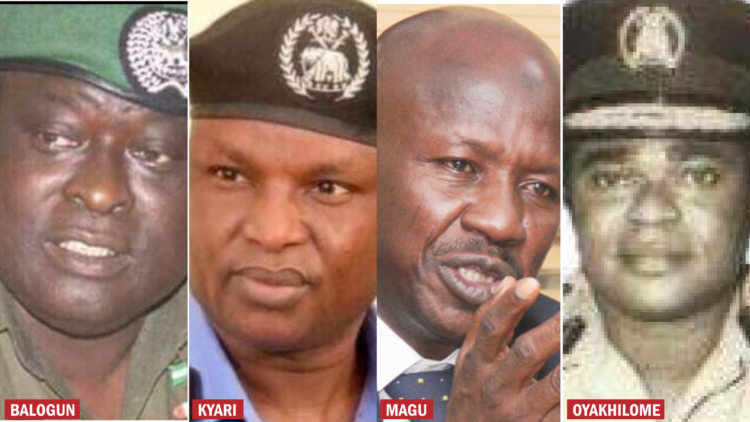 They are senior police officers who are at various times earned reputation as super cops whose successful exploits against criminal elements, economic and financial saboteurs, drug barons, insurgent and secessionist groups in the country was legendary, until they were caught up in the complex web of corruption and fraud that saw their careers crashing like pack of cards.

21st CENTURY CHRONICLE analyses some of these prominent police officers whose career was truncated in controversial circumstances.

Oyakhilome was a Police Commissioner in the 1980s who had risen through the ranks since he joined the Nigeria Police Force in 1959.

He became military governor of Rivers State in January 1984 after the military overthrew the Second Republic. As a military administrator, Oyakhilome recorded many feats. He established Rivers State College of Arts and Science in Port Harcourt; and as governor, he successfully increased agricultural output in the state. Also his “School to Land” program made headline news during the period until it was later abandoned by his successor.

However, Oyakhilome’s greatest challenge in office was after he was appointed chairman of the National Drug Law Enforcement Agency (NDLEA) in 1988. He was accused of having a relationship with Jennifer Madike, a Lagos businesswoman and socialite who had been arrested for drug-related offences. She was arrested on a charge of collecting US$80,000 from three men. Madike claimed she would give the money to Oyakhilome to secure the release of two suspected drug dealers. The matter became a national embarrassment, and Oyakhilome was dismissed from the Nigeria Police Force.

Tafa Balogun was appointed Inspector-General by President Olusegun Obasanjo on March 6, 2002. He took over the affairs of the police force when the morale of the rank and files of the security institution was at its lowest, due to poor welfare and inadequate training. The crime rate, mostly armed robbery, had also surged during the period.

However, Balogun’s eight-point strategy, which included “massive onslaught against armed robbery and other crimes, comprehensive training programme conducive for qualitative policing, improved conditions of service and enhanced welfare package for all officers, inspectors, and rank and file,” among others, began to stem the tide within a short period of time and earned the police boss public accolade.

Analysts believed that trouble started for the erstwhile IGP when he began to run a one-man affair at the Force Headquarters, thereby jettisoning ideas and suggestions of his lieutenants, and constantly interfering in the activities of their departments.

But the one that nailed the coffin was in early January 2005, when it became obvious that Balogun was under financial probe by the Economic and Financial Crimes Commission (EFCC) headed by an Assistant Commissioner of Police Nuhu Ribadu, who had received a deluge of petitions on the illegal activities of the former IGP. The investigation which started discreetly turned out to be the shocker of the year within few days, and Balogun began to see his exit from the Police force became undoubtedly devastated.

On March 30, 2005, after he had exited the office, Balogun was arrested in Lagos by policemen acting for the EFCC. He was later arraigned and sentenced by a Federal High Court in Abuja to six-month imprisonment for concealing vital information to the EFCC over his alleged business concerns and interests in some companies amounting to over N17.7 billion.

Balogun pleaded guilty to eight of the 56 count charges directly affecting him and was convicted for six months in each of the charges. The court verdict was believed to be the culmination of the series of plea bargains being worked out by Balogun’s lawyers and those of EFCC for two months.

He was directed by the court to pay N500, 000 on each of the eight counts charges totalling N4 million; forfeit 14 of his assets located in Lagos and Abuja, and ordered the Corporate Affairs Commission (CAC) to strike out names of his companies from its register.

The reign of Ibrahim Magu, a Deputy Commissioner of Police was dogged by controversy and allegations of corruption, since his appointment as the acting EFCC Chairman in 2015 by President Muhammadu Buhari.

Despite Buhari’s insistence that the administration will not spare any person in its anti-corruption drive, some Nigerians believed that Magu was only been used to persecute the political enemies of the ruling All Progressive Congress (APC), as evidence from the people the anti-graft agency had arrested over corruption allegations.

Interestingly, Magu’s major enemies were within the administration he served. His trouble started when in 2016 the Department of State Services (DSS), in two damning reports submitted to the National Assembly, accused him of living large in a N40 million mansion, flying in private jets, and receiving kickbacks from persons he should be investigating for corruption.

It was based on this report that the APC dominated 8th Senate twice refused to confirm Magu’s appointment, and argued that he had failed the integrity test and wasn’t above board as an anti-graft czar.

But when the coasted was clear that Magu confirmation could scale through Ahmed Lawan –led 9th Senate in – since Bukola Saraki who was seen as the arrowhead that prevented Magu’s confirmation couldn’t return, in June 2020 the Attorney-General of the Federal and Minister of Justice, Abubakar Malami wrote the President seeking Magu’s removal as the anti-graft boss.

In the petition to President Buhari, Malami accused Magu of diversion of recovered loot, insubordination, and recklessness, arguing that the erstwhile EFCC boss was a liability to the anti-corruption war. Hence, the President constituted a probe panel led by retired Justice Ayo Salami, to investigate the allegation while suspending the anti-graft boss from office pending the outcome of the probe. Magu never returned to the EFCC.

Kyari, a Deputy Commissioner of Police, came into the limelight in 2017 when the Police Intelligence Response Team (IRT) he headed arrested a notorious kidnaper, Chukwudi Onuamadike, popularly known as Evans.

His popularity continues to rise through the years as pictures of his team’s exploits against Boko Haram and bandits began to fill the media space.

However, Nigerians began to doubt the ethical disposition of the super cop when stories about how he allegedly converted properties of some criminals he arrested to personal use, and his close association with people of questionable characters began to fill the social media space.

Kyari’s popularity suddenly plummeted on July 26, when the United States District Court for the Central District of California ordered the Federal Bureau of Investigation (FBI) to arrest him over his alleged role in a multi-million-dollar fraud perpetrated by Ramon Abbas, popularly known as Hushpuppi, and his co-conspirators.

Hushpuppi, a suspected billionaire fraudster known for his luxury lifestyle was arrested in the UAE last year and extradited to the United States for alleged hacking, impersonation, scamming, banking fraud, and identity theft.

The court had accused him to have received a bribe from Hushppuppi to arrest and jail an estranged ‘co-conspirator,’ Chibuzo Vincent.

Though, the super cop denied the allegations – but admitted facilitating the purchase of N300,000 native clothings for the billionaire fraudster – he was suspended by the Police Service Commission (PSC) on August 1, based on the recommendation of the Inspector-General of Police (IGP), Usman Alkali Baba.

Dr. Aminu Umar of Department of Sociology, National Open University of Nigeria (NOUN) attributed the fall of top-rank officers to a structural problem.

“For instance, for you to rise in Nigeria Police, like many institutions in the country, you have to be closed to some powerful people in the system, and also align with their interest,” he said.

“You may not necessarily be the most qualified, but once you can do their bidding. It is in the process of doing the bidding of their ‘godfathers’ that they are caught up in the web of corruption.”

Umar said the only way to avert further fall of ‘super cops’ was to strengthen the institution with men of integrity.

“Recruitment into the Police must also be based on merit,” he said. “We should stop politicization and monetization of recruitment.”

How to save police from further disgrace – Security experts

In his part, a security expert, Bem Japhet Audu, said corruption is gradually becoming systemic in the country, which has spared nobody.

“Agreed that there are exceptional people in the Police that can stand the test of time anywhere in the world. But when you have a system that is corrupted you are bound to have issues like these.

“It is also important for us to know that the Police have enormous powers, given to them because of the role they play in the society. There is every tendency for them to abuse it. Basically what happened to Kyari and those before him was an abuse of power.

Audu said Nigeria has enough laws to fight corruption but lacks leaders that are willing to implement them.

He said when every police officer or those in authority internalize the fact that they are holding their positions in trust, they will serve the people better, and the issue of indicting them of corruption will in the barest minimal.

But a security consultant and analyst, retired Major Bashir Galma, said the situation has nothing to do with structure, but innate human characteristics.

“No matter hard any human being is, there is always something that can bend him to go off the norms and ethics,” he said.

“Nigerians expect a lot from their leaders even when they know that generally, this is how we are. The system is corrupted to the level that people share money and nobody cares about sources of money, all they want to see is flamboyant life. Unfortunately, everybody wants to be part of a group of flamboyant people.

“Sometimes we believe that it is because of meager salaries that are the cause of corruption, but that is not. It is the behavour of the generality of Nigerians who want to show off.

“Also, in the intelligence network, the end justifies the means, and everything you do as a leader is applicable – whether you take a bribe or spend money carelessly – the most important thing is for the job to be done well. You can be working with the biggest thief to win his trust, so that you can lead the authorities to his source of wealth.”

Galma said leaders should always be careful and lean from the mistakes of their predecessors to avoid falling into the same trap.

Zamfara: PDP asks police to provide security for deputy governor to take over