SPECIAL REPORT: APC crisis: What next for these ‘Abuja politicians?’ 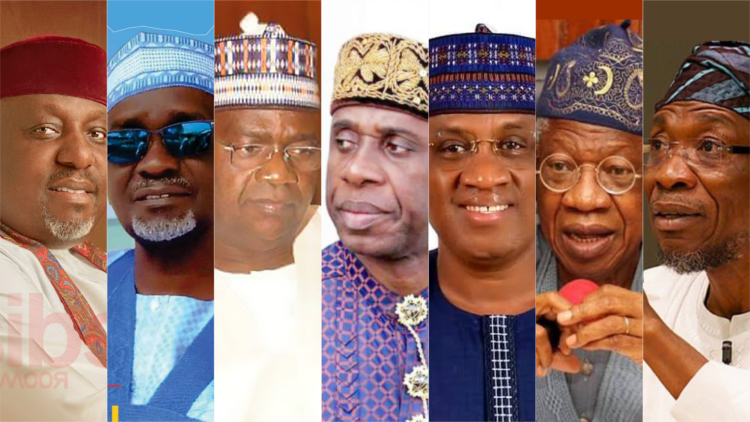 There is no doubt that these are stormy days for the ruling All Progressives Congress (APC) ahead of its planned national convention slated for February, 2022.

President Muhammadu Buhari penultimate Monday approved February for the much-awaited convention, but the party was, however, silent on the specific date the event will hold thereby drawing criticisms from stakeholders.

However, the fact that the convention date is not cast in stone is of less worry to the stakeholders, especially as there are more daunting challenges choking the party.

Controversies such as the status of the Mai Mala Buni-led Caretaker/Extraordinary Convention Planning Committee (CECPC); rumble over direct primary; vexed issue of zoning of political offices and the raging war that trailed the last congresses across the states.

Among the knotty issues, the cracks from the outcome of the congresses seem to pose more danger to the existence of the party as a unit and undermine its fortunes ahead of the 2023 general elections.

The struggle for the control of the party among stakeholders led to the emergence of parallel executives at ward, local government and state levels during its congresses between July and October, 2021.

There were supremacy battles among ministers, presidential aides, former governors and governors. While in other states where APC is in the opposition, founding members were staking claims in the struggle for the control of the party.

The party secretariat, through the CECPC’s Secratary, Senator John James Akpanudoedehe, dismissed the congresses as “mere naming ceremonies” which were not in consonance with the constitution and the guidelines of the party, adding that only exercises conducted by duly inaugurated state congress committees would be recognised.

He vowed that the party would apply appropriate sanctions against chieftains identified as “masterminds” of such acts that were inimical to peace and unity of the ruling party.

Despite the threats, the CECPC went ahead to set up appeal panels to entertain complaints arising from the state congresses, but aggrieved members have so far avoided the panels, calling the bluff of the caretaker leadership and testing the grip of the sitting governors on the party in APC states.

Analysts have agreed that the congresses outcome and the stance of the party’s leadership have somehow put certain stakeholders, mostly the “Abuja politicians” in a tight corner ahead of the national convention.

But can they succeed in their quest to be remain relevant and secure their positions within the party’s hierarchy within such space of time?, Professor Yusuf Ali Zoaka (political Science and international relations), University of Abuja, has his doubts.

“What happened during the congresses was a calculated plan to alienate certain elements within the party; it is a familiar trend within major political parties in Nigeria; where contending forces fight for interest,” he explained.

He said in an era when sitting governors held the ace across the states they would continue to shut the gates against other stakeholders.

“You can see what happened; those congresses supervised by the governors and national officials are recognised and anything outside that are illegal; even when you denied people access to forms. The leadership claimed that they agreed on consensus, but how can you have a consensus without the consent of all stakeholders?” He queried.

Which way for aggrieved stakeholders?

Analysts believe that altercations may force aggrieved stakeholders to adopt desperate measures to secure their political future either within the party on in alternative platforms.

“We saw that under the PDP when Goodluck Jonathan decided to contest against all odds. What happened in the end? It was the same PDP members who were collecting money from him that betrayed him,” he added.

On the other hand, Dr Salihu Evuti, also of the Department Political Science and International Relations, University of Abuja, predicted a mass exodus in the coming weeks over the discontents in the party.

“Implosion, as it things stand, is inevitable because those who are alienated will find their ways to other platforms unless the party acts promptly to avert such possibility,” he noted.

How can the party avoid this?

“By sitting down and discussing with the aggrieved stakeholders, and if possible, accommodate them within the exco by stepping down some positions within the new state executives for them to fill up as a way of offering an olive branch,” Professor Zoaka advised.

However, some aggrieved stakeholders have vowed to fight on through whatever means possible. Earlier in the week, Senator Kabir Marafa, one of the factional leaders of the party in Zamfara State, said he would not leave the party for “labourers, masons, plumbers and carpenters.”

Marafa represented Zamfara Central in the senate from 2011 and 2019. He has been at loggerheads with the party’s leadership following the events that led to the defection of Governor Bello Matawalle to APC.

Speaking against the backdrop of media reports that he has jettisoned his party, APC, for the main opposition Peoples Democratic Party (PDP) following the lingering crisis of leadership in Zamfara APC, he said, “We are not going to leave the complex in the hands of those who were labourers, masons, plumbers and carpenters in the design and construction days; no way! We are not going anywhere.”

Marafa’s media aide, Bello Bakyasuwa, told 21st CENTURY CHRONICLE in an interview that his boss might head to court as the last option if the national secretariat failed to accept the outcome of the congresses his boss recently conducted in the state.

“We’ll first go to court so that the issue can be addressed because we don’t believe it’s okay for anybody to just wake up, decamp from another party and hijack everything to himself. We’re not going to accept that. We’re the real APC members and he (Matawalle) knows that. We’re not going to leave the party for anyone,” he said.

Like Marafa, former Governor Abdulaziz Yari’s camp has its executives across all levels in place, while daring the national secretariat to question their legitimacy. One of the media aides to the former governor, Abubakar Limanci, told 21st CENTURY CHRONICLE in an interview that his boss had always been clear about the situation.

In other states, Amosun, Aregbesola, Mohammed, Amaechi, Goje, among others’ camps said exiting the party was hardly an option, while vowing to fight on.

Ray of hope for stakeholders?

In what seems to be a light at the end of the tunnel for the aggrieved stakeholders, the Federal Capital Territory High Court last Tuesday upheld the outcome of the ward congresses held by a former Governor of Kano State, Senator Ibrahim Shekarau, while voiding those of Governor Abdullahi Ganduje’s camp endorsed by the national secretariat.

The court’s outcome rekindled hope among aggrieved stakeholders that they can also secure victory in court against their respective governors.

21st CENTURY CHRONICLE reports that there are several cases pending in courts against the congresses outcome and party’s caretaker leadership, which analysts fear, may affect the party’s national convention scheduled for February.

Factions across the states have continued to hail the judgment as a positive signal that would alter calculations ahead of the convention.

However, the crisis in the Kano chapter worsened after the judgement as thugs unleashed violence at the Shekarau.  A day after the Abuja  ruling, the Kano State Government sealed up the building Housing the chamber of Shekarau’s counsel who handled the case. This was followed by an attack on the campaign office of Senator Barau (APC, Kano North) located along Maiduguri road.

Dialogue is the way out – Don

Analysts are unanimous that the party must explore dialogue in order to avert its impending collapse.

“They need to find a way of mending their fences by setting up committees to unite all the different factions in order to avert the collapse of the party in the end,” Professor Zoaka advocated.

He said aggrieved stakeholders posed serious threat to the unity and existence of the party as an entity, especially with various court cases against the Buni-led committee.

According to media reports, there are currently no fewer than seven cases pending before the Federal High Court, Abuja, challenging either the legitimacy of the Governor Mai Mala Buni-led party leadership or the outcomes of decisions taken by the committee since its inauguration on June 25, 2020.

Abdullahi Adamu’s panel to the rescue?

In September, the Buni-led committee announced the composition of a nine-member National Reconciliation Committee to reconcile the aggrieved members of the party across the country.