by Hadiza Onido
in Lead of the Day, Special Report, Video
0 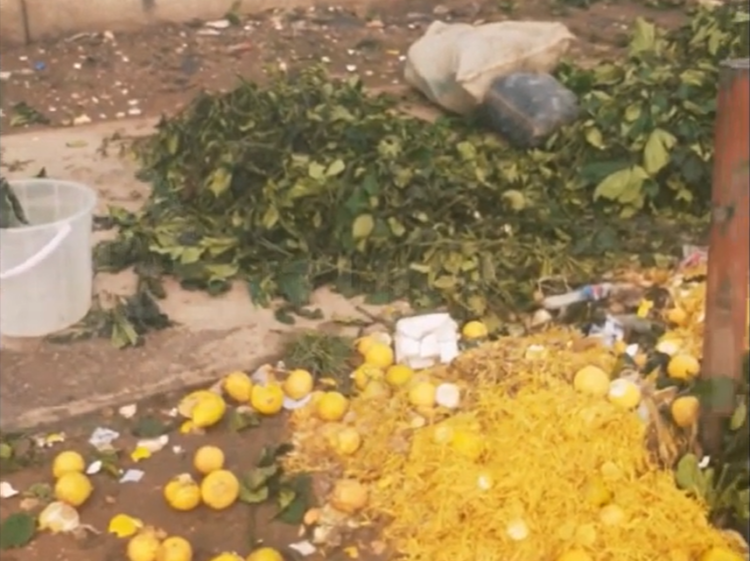 At a market Kubwa – a suburb in the Federal Capital Territory (FCT), Mama Tola spreads a large quantity of Pomo (cow hides) on bare ground, close to dirty drainage, radiating unpleasant smell, with flies buzzing around the popular delicacy so loved by Nigerians.

As customers passed in front of her stand, she called their attention to the item on display. “Get your Pomo here. N100 per slice,” Mama Tola echoed, as she tried to chase the flies away.

Though Mama said she was not unaware of the health risk the poor handling of the commodity could cause her customer, the space she occupied in the market was too small for her to spread all her wears on the table.

She said she sometimes had to result in the method of spreading the Pomo on the bare ground in order to enable her to sort the sizes before she packaged them for sale.

Although she claimed she usually wash them again before packaging them for sale, a claim that was contrary to action when a customer came to buy, as she quickly select some Pomo from the ground and put inside a nylon leather for the customer, while the customer showed no resistance to the nature of the displayed item.

“I don’t mind the way the Pomo is displayed because I will end up cooking it and all the impurities and germs it harbors will die,” the customer who simply identified herself as Mabel said. “

“If it was something I would eat fresh, I wouldn’t buy it in this state. It is well,” she heaved.

But many Nigerians will not also mind how vegetables, which need little time to cook, are displayed, judging from the way they patronize greengrocers who display them in open spaces.

Opposite the popular Garki old market in the heart of Abuja city, some greengrocers spread fruits and vegetables on the bare floor, near a pile of trash. While their customers trooped around to purchase for retail, rats and other pests moved around the thrash pile to feats on food remnants. They occasionally moved over to the fresh fruits and vegetables arranged on the floor, and greengrocers struggle to chase them away.

A lady was running away from the rodents, only to stand under a shade and beckoned at the greengrocer to get her some vegetables from the same place.

“Nigerians are always lackadaisical about the quality of things they eat,” said a passerby, “you can’t imagine how people rush food items that are poorly displayed for sale in our markets. Even the meat, go to abattoir you will understand what I am talking about.”

But for Maimuna Akinwande the reason why people do not care about the ways food items are displayed in some places was that they are cheaper compare to buying in shops.

However, a Primary Care physician, and Director of Medical Services, Federal College of Education Abeokuta, Ogun State, Dr. Tijani Avovome, cautioned that while heat kills most bacteria, some organisms such as staphylococcus aureus cannot be destroyed by ordinary cooking but thorough cooking at temperatures above 150 degrees.

He said such bacteria are mostly found in starchy food, meats, cheese, and salads that were left at room temperature for more than two hours.

“This condition helps the staph toxins multiply and can cause diarrhea, vomiting, and nausea that can last for a few days,” Tijjani said. “Generally, the illnesses occurring from this organism are not serious but can be fatal for the very young and old.”

He added “ Staph toxin is a leading cause of food poisoning and it is mostly found on the skin, particularly in boils, pimples, and other infections. This makes it easy to be passed on to food through handling. Other bacteria not easily destroyed by heat are Salmonella, Perfringens, and Botulism.

“We need to handle food with the utmost care,” he cautioned.

A need to change our attitude towards food

Sharing a similar opinion, a medical doctor in the Department of Internal Medicine, Usman Danfodiyo University Teaching Hospital Sokoto, Dr. Hayatu Umar, said a lot of diseases can be transmitted through food and water.

He said deaths resulting from cholera can be traced to complications like hypoglycemia and severe dehydration, kidney, and renal failure.

“The condition of our abattoirs is nothing to write home about,” he said. “The meats are transported in unwholesome ways – in tricycles, motorbikes, and sometimes in unclean booths of cars. Bacteria can be introduced in this process.

“Some food sellers do their business in a dirty environment and use any kind of water they can find to wash vegetables like green leaves and the likes.”

Umar attributed this behavior to lack of education on the part of many Nigerians, about the importance of a clean and healthy environment.

“Although illiteracy is a contributing factor, it is not the only reason why health guidelines are not adhered to. Cleanliness is an attitude, and its consequence is good health and vitality. The government needs to step in and provide regulation and enforcement through their agents,” he said.

Sanitation officers to the rescue?

Umar advocated for the reintroduction of community health officers, known as Dubagari, especially in the Northern part of the country.

“There were health officers which we called Dubagari in the north those days and they performed very well, we need such people to come and play a role in this situation,” Umar said. “The situation in the north is bad, a sick population is a burden because it reduces productivity and causes avoidable expense on government.”

Dr Avovome said though the government in collaboration with some organizations was doing well in the area of sensitizing the citizenry about the dangers of unhygienic handling of food items, “it is time to enrich the old contents and apply punitive measures to ensure compliance to hygiene rules and regulations.”

The doctor observed that meals like parboiled moringa are sourced from bushes, sometimes contaminated with feces. Because it is not meant to be cooked through, the contaminants may survive and cause health challenges to the consumer some don’t even wash their hands properly after using toilets.

A businessman, Alhaji Bashir Onotu, also called for the reintroduction of local sanitation officers, as it was in the 1980s and the early 1990s.

“We called them Were-Were. The arrest, fined, or prosecute inhabitants of dirty environments. they went around the market to ensure environments were clean and food was handled according to set standards,” he said.

“They were very effective daredevils those days and we revered and obeyed them. The last time I saw a semblance of it was in the year 2000. Health officials were in Kaduna Veterinary Market testing meat.

“Unfortunately our institutions have broken down and it is really sad.”

Onotu urged the federal governments to take urgent steps to address the root causes of public health emergencies or “Nigeria will continue to suffer grave consequences.”

Until such measures suggested by these experts are implemented, sellers of food items and other Nigerians will continue to handle food items in our markets and home in unhealthy ways.

ANALYSIS: How Nigeria loses out as world’s happiest place