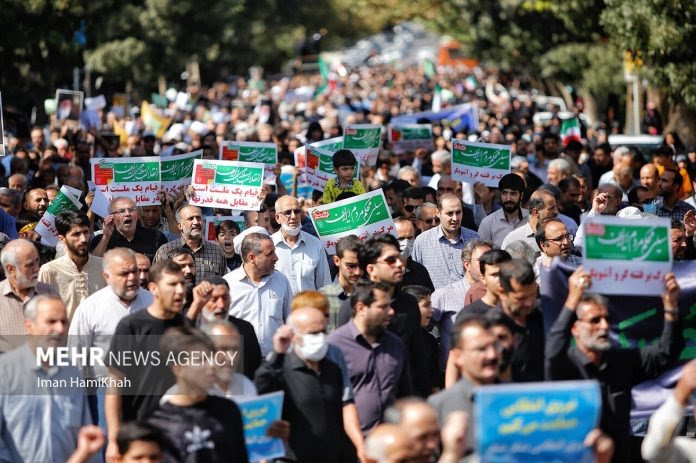 Millions of Iranians take to the streets across the country to condemn the acts of vandalism and desecration of Islamic sanctities by rioters in the past few days, as violent street protests have erupted in several Iranian cities over the death of a young woman, who died in hospital days after collapsing at a police station in the capital Tehran.

People took the streets in many cities and towns, including the holy city of Mashhad, the northwestern city of Qazvin, the central city of Esfahan as well as the western cities of Hamedan and Yasuj, to show their unity and outrage over the recent acts of sabotage perpetrated by rioters.

They strongly condemned the crimes and evil acts committed by a handful of mercenaries serving foreign enemies, who set fire to the Holy Qur’an, mosques, and the national flags and forcefully removed women’s headscarves on the streets, among other things.

Hundreds of thousands of people are all set to hold a massive demonstration in Tehran at 4 p.m. local time (1230 GMT) to vociferously condemn the recent deadly riots and attacks on security forces, public property, and sanctities.

Protests have broken out in several Iranian cities over the September 16 death of Mahsa Amini, a young Iranian woman who died at the hospital a few days after collapsing at a police station in the capital Tehran, where she and a group of others were receiving educational training on dress code rules.

Despite Iranian officials’ clarification on the circumstances surrounding Amini’s death, violent street protests have led to attacks on security officers and acts of vandalism against public property and sanctities.

Speaking on Friday, Iran’s Interior Minister Ahmad Vahidi said the riots that have followed Amini’s death, had nothing to do with the tragic event, stating that the issue was being exploited by rabble-rousers to instigate chaos and wreak havoc across the country.

The video rejected claims that she was beaten up, denying any physical contact with her.

Dr. Massoud Shirvani, a neurosurgeon, told IRIB TV2 television channel on September 20 that the deceased woman had a brain tumor removed at the age of 8.

“Mahsa Amini was treated with drugs after the surgery under the supervision of an endocrinologist,” the physician said.