INVESTIGATION: How 34 security officers were gunned down by their colleagues

by Muhammad Shehu
in Investigations, Lead of the Day
0 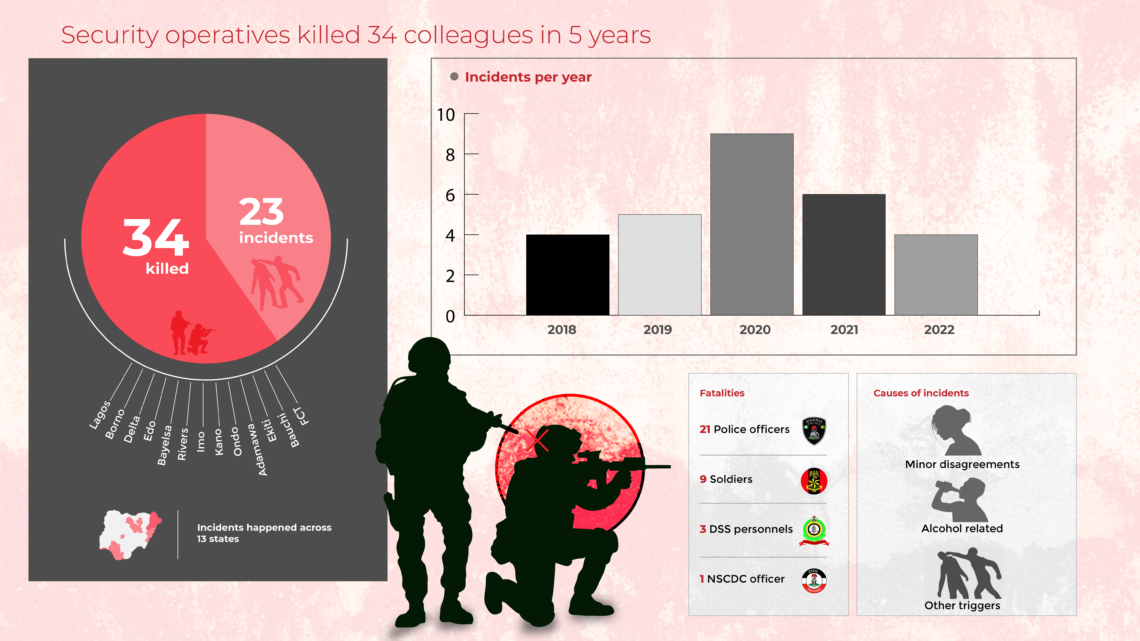 At least 34 security personnel were killed by their colleagues across country within the last five years, findings by the 21st CENTURY CHRONICLE have revealed.

The fatalities were recorded in 23 incidents across 13 states between 2018 and April 2022.

Analysis of media reports of the cases revealed that the casualties include 21 police officers, nine military personnel, three Department of the Security Service (DSS) personnel, and one Nigeria Security and Civil Defense (NSCDC) officer.

Most of the incidents sparked off from minor disagreements, alcohol related influences and other triggers.

The analysis of the incidents showed that four died between February and March, 2022 with an equal number of fatalities in Lagos, Borno and Delta states, while seven lost their lives in six incidents between May and December 2021.

However, the fatalities were higher in 2020 with nine deaths from six incidents.

In a single incident which happened in February that year in Borno State, a soldier working at the Army Super Camp 15 in Malam Fatori killed four of his colleagues and turned the gun against himself.

During the incident, two other soldiers were also injured and rushed to the hospital for medical attention.

The statistics also indicated that five personnel lost their lives in 2019, while four others met their death in the hands of their colleagues in 2018.

Lagos has the highest rate of the incidents with one among every yearly occurrence taking place in the state, followed by Borno State within the year under review.