by Aliyu Musa Yar'adua
in Lead of the Day, National news
0

United States District Court for the Central District of California has issued a warrant of arrest for a Nigerian Deputy Commissioner of Police, Abba Kyari, over his alleged role in a multi-million dollar fraud perpetrated by Ramon Abbas, popularly known as Hushpuppi, and his co-conspirators.

A statement by the court on Wednesday said Hushpuppi bribed Kyari to arrest and jail an estranged ‘co-conspirator,’ Chibuzo Vincent.

Hushpuppi, a suspected billionaire fraudster known for his luxury life, was arrested in the UAE last year and extradited to the US for alleged hacking, impersonation, scamming, banking fraud, and identity theft.

The Nigerian super cop, however, denied the allegations on Thursday but admitted facilitating the purchase of N300,000 native clothing for the billionaire fraudster.

Hushpuppi, 37, had pleaded guilty to wire fraud and felony, amongst others, in the US this week, and according to the FBI, Messrs. Abbas and Kyari were buddies and were both involved in a money-laundering scheme. Hushpuppi risks 20 years’ imprisonment and other penalties if convicted.

Kyari was also charged with accepting money from Abbas in exchange for the arrest of “one of his rivals in Nigeria after a dispute over a $1.1 million scam on Qatari businesspeople”.

Reports said American prosecutors first filed a court warrant to arrest Kyari on February 12, 2021, while a new warrant for his arrest was issued on April 29, 2021.

On July 26, Judge Wright’s order allowing the FBI to arrest Kyari and hold him in US custody was made public. 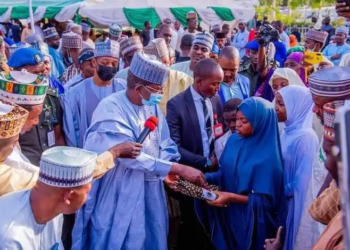