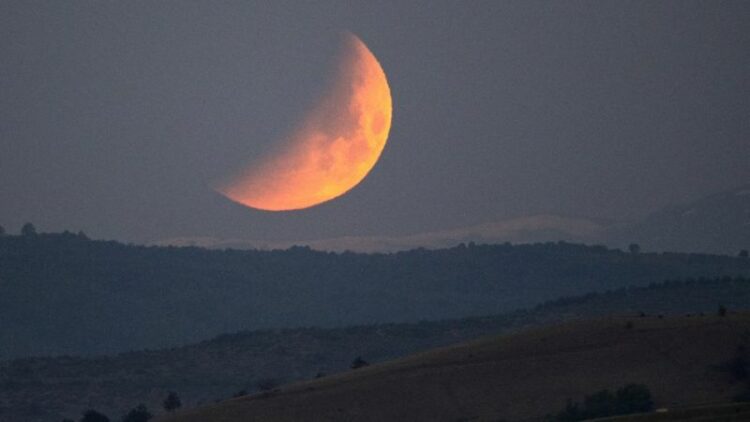 Stargazers have been treated overnight to a stunning and unusual sight – a super blood Moon.

Shortly after 03:30 GMT on Monday, Earth’s orbit meant that for several minutes our planet was positioned directly between the Sun and the Moon.

In that time the Moon fell completely into Earth’s shadow – temporarily turning it a dusky shade of dark red.

Its hue was created by sunlight being projected through Earth’s atmosphere onto the Moon’s shadowed surface.

The lunar eclipse coincided with a separate event – a super Moon. This is when the Moon is at its closest point to Earth in its orbit and so appears larger than usual

Those watching out for the resulting super blood Moon got the best view from 03:29 GMT, the moment the full lunar eclipse started and the event became visible in the Western hemisphere.

For almost one and a half hours afterwards, the only sunlight reaching the Moon had passed through the Earth’s atmosphere turning it red.

In Europe, the phenomenon was only visible for some of that time because of the Moon beginning to set. But in the Americas areas under clear skies were treated to the full spectacle.

“You’ll actually be seeing every sunrise and every sunset occurring around the Earth at once. All of that light will be projected on to the Moon,” explained Dr Gregory Brown, astronomer at the Royal Observatory in Greenwich, London, ahead of the event.

“If you were an astronaut standing on the Moon, looking back towards Earth, you’d see a red ring running around the outside of our planet,” he told the BBC.

10 things you should know about acting CJN Olukayode Ariwoola

Olukayode Ariwoola takes over as acting Chief Justice of Nigeria

11 killed in multiple attacks in Benue