by Nuruddeen M. Abdallah
in Chronicle Roundtable, Lead of the Day, National news
0 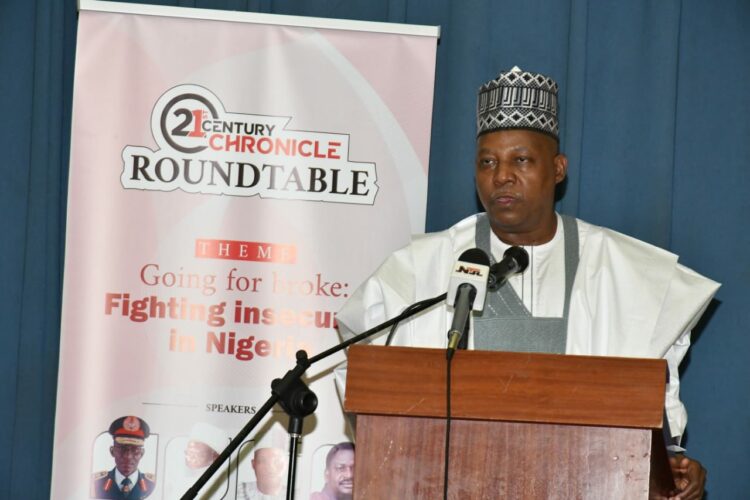 I want to thank the distinguished journalists of 21st CHRONICLE, for putting together this 1st ROUNDTABLE. It is a very poignant way to announce the arrival of the organisation on the national socio-political space in Nigeria. And in a very fundamental sense, a ROUNDTABLE like this reflects the social responsibility that’s associated with very best traditions of the media; especially in a developing country, like Nigeria. Secondly, the choice of theme: COMBATTING INSECURITY IN 2022 also speaks to a matter of the utmost importance to our country today. And in selecting speakers, 21st CENTURY CHRONICLE has also been very thorough, by bringing the most relevant individuals, who can offer the most enlightened perspectives, to what have become the greatest national security challenges that we are dealing with today.

My own task is the easiest this morning. I have been requested to be Chairman of this morning’s session, which also has a general theme: “GOING FOR BROKE: FIGHTING INSECURITY IN NIGERIA”. The Guest Speaker for this session is the Chief of Defence Staff of the Armed Forces of the Federal Republic of Nigeria, General Leo Irabor. General Irabor is an officer and gentleman, that I have the privilege of knowing very well, because he was a Commander of our forces, in the fight against the Boko Haram insurgency, at the time that I was Governor of Borno State. I can speak for his commitment to very exacting professional standards in the forces that he commanded; his patriotism and knowledge, which led to his reaching the pinnacle of his profession, as the Chief of Defence Staff, of our armed forces.

We are gathered this morning, at a very difficult conjuncture in our country. The most difficult issue that confronts us is the all-pervasive problem of security, or insecurity, in our dear country. There’s no part of Nigeria today that we can go to, without our hearts in our mouths, because of the security situation. I como from the Northeast, where our people have battled a long and sustained insurgency, for over a decade. We have a first hand experience, of the destruction associated with Boko Haram and ISWAP: loss of lives; the wilful and unconscionable destruction of infrastructure; the immiseration of people who are already living precariously; the overturning of communities, and the deliberate imposition of the most heart-wrenching forms of violence on young women; forcible recruitment of young men and their drugging, to be able to commit crimes.

The effects of the insurgency are stark. According to statistics of the National Emergency Management Agency (NEMA), as of January 2015, Nigeria had recorded a total of 873, 703 internally displaced persons (IDPs); the NEMA report noted that about 254 schools were destroyed and

120,077 students were forced out schools by the end of 2014. On the economic front, the Northeast had suffered an estimated $9Billion, or N274.5Billiono Borno State suffered the highest loss of $5.9Billion. Loss of agricultural production in the Northeast as a result of the activities of Boko Haram, amounted to $3.5B.

Borno State saw the massive destruction of homes, schools, hospitals, bridges and other infrastructure. At the beginning of this month, His Excellency, Governor Babagana UmaraZulum, noted that Borno State actually lost 900,000 houses and 5,000 classrooms, to the insurgency. He added that 800 municipal buildings, comprising police stations, traditional rulers’ residences, local government secretariats, amongst others, were lost.

And these were just the official figures; the unofficial estimates paint a more horrible picture. used to also point out, that the insurgency inflicted terrible psychological damage while it similarly pauperized the survivors of the criminal attacks of the members of the Boko Haram sect.

Our people in the Northwest have also systematically been inflicted with a level of violence, loss of lives, humiliation and the destruction of communities, associated with the spike in banditry; the mutation of farmer-herder conflicts into generalised rural warfare which manifested in cattle rustling; the extraction of money out of people in communities, by roaming bands of very highly armed criminals, who also use rape and sexual violence, as part of a generalised criminality, that has torn asunder, urban and rural communities, in such North-western states as Katsina, Kebbi, Sokoto, Kaduna and Zamfara.

Some of the statistics available indicate that at least 12,000 people have been killed, and not less than 450,000 people have been displaced. In the extreme border areas of our country, many people have crossed the borders, and moved into neighbouring countries, like Niger, Chad and Cameroon, that also suffer the consequences of the insurgency.

The North Central isn’t spared of these problems, as we have increasingly witnessed in Niger State in recent months, as well as in certain parts of Kwara State. Of course, farmer-herder conflicts have been rife for years in Benue, Nasarawa and Plateau. These have also been fought out, along very delicate fault lines of ethnicity and religion, thus complicating all efforts to find solution. The most difficult part of the issues involved, has been the manner that our political elite, have in turn, attempted to exploit the situation, to the detriment of inter-communal harmony, and thus deepening national security problems in those regions, and nationally, by extension.

When we move to the Southern regions of the country, we face different forms of insecurity. The Southeast is now a region where IPOB secessionists are daily undermining economic and communal existence, as they impose their own form of disorder; their targeting of other ethnic and economic groups are deliberately done, in order to extract revenge killings in other parts of the country. The highly respected elders and influential people seemingly acquiesce in what’s going on, by their silence, or inability to forthrightly call out those imposing a generalised violence and disorder, in the region. The restiveness in the hydrocarbon-producing communities has been much longer, and there are alternating moments of restiveness and relative peace. While secessionist agendas are embedded in stirrings emanating from the Southwest, along with ritualistic killings; “Yahoo-Yahoo” crimes, and sundry criminality that fill the social media spaces, regularly.

The consequences of this broad sweep of insecurity in the country, has led to the overstretching of our security forces, as they endeavour to deal with, or cope with, these generalised forrns of security challenges. By 2016, members of the Nigerian armed forces were deployed in 30 of our 36 states, in internal security operations.

It is clear, to all of us, that the primary duty of government is to guarantee the security of lives of Nigerian citizens. This basic constitutional obligation has faced generalised challenge of insecurity, as we have outlined so far. And the danger involved in the situation we face, is the increasing delegitimisation of the processes of governance, amongst broad sections of the community. For many of our vibrant, educated and aspiring young people, the way out, is to leave the country, to more secure countries. We are haemorrhaging our best trained doctors, nurses and other highly trained manpower. They are being lured with better salaries, more secure settings and better working environments, in the Western world and the Middle East.

We face very serious challenges as a country, especially for those of us who have leadership roles, in the different arms of government in our country. Or even as leaders in the private sector, in civil society organisations, and this includes the media. We must play a very active role, in the search for solutions to the hydra-headed monster of insecurity that face our country today.

This calls for the most determined effort at understanding the nature of the security challenges that our people face, in different parts of the country. We must similarly think critically and creatively, and in concert with the institutions of the Nigerian State, charged with the responsibility of dealing with these security challenges, to find new ways to deal with the situation.

But we must also be constantly aware, that security does not stand isolated, from the general economic health of the country. Is the economic situation such as to give hope to the huge majority of our young people, who enter the job market each year? Is the economy creating enough jobs or legitimate avenues for self realisation by our people? Is there hope, that economic choices that we are making, would in the short, medium and long run, provide the types of opportunity, that can see the flowering of our young people, in manners that can help us deal with consequences of underdevelopment, that really are the roots of insecurity? In my view, these are not idle questions, and the more we find the links between the economy and security, the more authentic would be all endeavours to solve the problems confronting us as a nation.

That means that politics, which is central to the lives of politicians, either in the Executive or Legislative Arms of government, must be clearly understood, firmly, in the context of efforts to find solutions to the challenges of national development. The greatest challenges we face today, are related to security, as well finding the economic development to give opportunities to our young people.

Our country is a country of very young people today. According to the United Nations population tracking system, WORLDOMETER, as of February 2022, Nigeria has a population of 214.958 million people. That makes us the 7th most populated country on earth. The median age is 18. I years, while 52% of our population now lives in the urban areas. 75% of that population is under the age of 35 years!

Distinguished ladies and gentlemen, let’s work in a concerted manner, against the background of expectations of the Nigerian people, to rethink all the issues in the economy, politics and security, to be able to find the right answers to problems that confront their lives. And none is more urgent; more pressing and more long-lasting, than the issues associated with insecurity in our country today.

Finally, 1 want to thank 21st CENTURY CHRONICLE for this Roundtable; it is the first, but it should only be the beginning of many more, to play a pivotal role, in the national development process in our country.

I thank you all for listening.

Being a text of speech by Senator Kashim Shettima at the First CHRONICLE ROUNDTABLE, with the theme: ‘Going for broke: Combating insecurity in Nigeria’ held at Shehu Yar’Adua Centre, Abuja on February 23, 2022.

Deconstruction of Jega and the lies they tell against Ortom, by Nathaniel Ikyur