The total money disbursed to farmers in the Anchor Borrowers Programme (ABP) since its initiation in 2015 is N1.01 trillion, the Central Bank of Nigeria (CBN) has said.

This was contained in a communiqué by CBN governor, Godwin Emefiele.

The ABP, an initiative of the President Muhammadu Buhari administration, launched in 2015, was meant to boost agricultural production, improve foreign exchange and reverse Nigeria’s negative balance of trade on food and captures smallholder farmers cultivating cereals including rice, maize, wheat and other crops; cotton, roots and tubers, sugarcane, tree crops, legumes, and tomato, as well as livestock.

“Between April and May 2022, the bank released the sum of N57.91 billion under the anchor borrowers’ programme (ABP) to 185,972 new projects for the cultivation of rice, wheat, and maize, bringing the cumulative disbursement under the programme to N1.01 trillion, disbursed to over 4.2 million smallholder farmers cultivating 21 commodities across the country,” Emefiele said.

He further stated that the bank also disbursed the sum of N1.50 billion, under the accelerated agriculture development scheme (AADS), to one (1) new youth-led project, piloted and funded through the Government of Ondo State for the acquisition of assets for oil-palm cultivation and the establishment of poultry farms.

“This brings the total disbursement under the Scheme to N21.23 billion for 10 state-led and three (3) private sector-led projects.

“The funds were utilized for the establishment of a ranch and milk processing facility; procurement of feed and medication for livestock/dairy production; construction of a 300 metric-tonne per day oil mill in Gusau, Zamfara State; acquisition and installation of an agrochemical factory; as well as purchase and stockpiling of homegrown maize for animal feed production. This brings the cumulative disbursement under this scheme to N741.05 billion for 674 projects in agro-production and agro-processing,” the communiqué read. 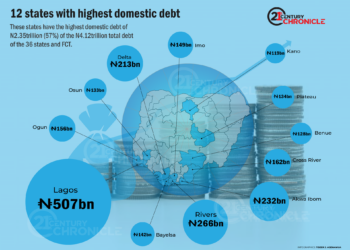