ANALYSIS: Inside story of Jonathan’s 2023 gamble

by Ahmed Tahir Ajobe
in Lead of the Day, Politics, Special Report
0 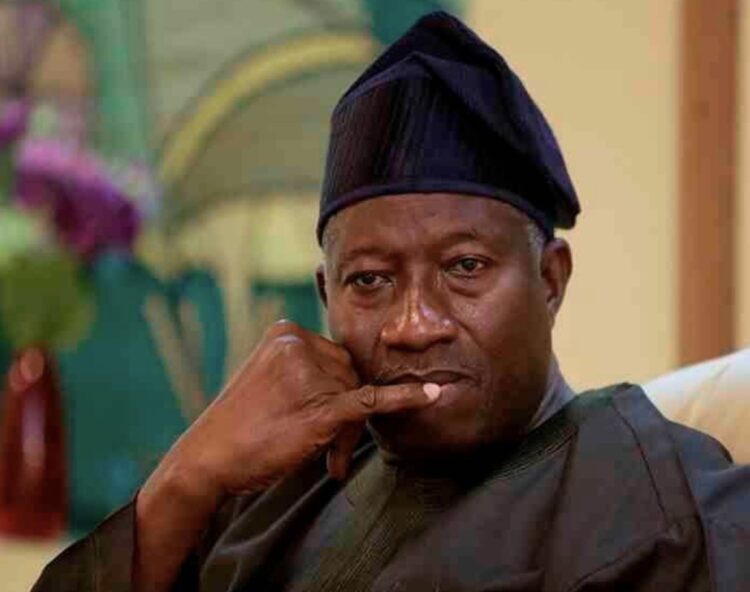 Within the last two weeks, the plan by some key All Progressives Congress (APC) chieftains to drag former President Goodluck Jonathan into the presidential race ahead of the 2023 general elections has been the main subject of debates among political analysts.

What makes the debates so heated is that Jonathan is expected to contest the presidency on the ruling party’s (APC’s) platform; a move analysts have used unprintable terms to describe. The situation is compounded by the fact that the former president’s body language and actions indicate an interest to be introduced into the race.

Last week, Jonathan’s posters flooded the national secretariat of the APC on Blantyre Street, Wuse II, Abuja. The ex-president also held a meeting behind closed doors with some youth groups canvassing for his return to power in 2023 in his office in Maitama, Abuja. Jonathan, who addressed the youth groups who arrived in five buses, was noncommittal over his ambition, asking them to “just watch out”.

A day later reports quoting top APC sources revealed that Jonathan had already put his demands across to party stalwarts fronting for his emergence, noting that part of his request was an assurance that he would get President Muhammadu Buhari’s backing.

A source was said to have said, “Jonathan has already been president before. So, the APC cannot offer him anything except the presidential ticket. Imagine him contesting against Osinbajo and Tinubu and losing? Wouldn’t that be disgraceful?

“So, he has made his position clear. If he is to come to the APC, he must be given the assurance that he would be given the party’s ticket. That is his demand.”

So far, neither the former president nor his aides have come out to deny the reports, although many doubt whether Buhari could betray key his associates, some of who were foundation members of APC who have not just declared their interests, but purchased the expression of interest and nomination forms to succeed him.

“How would presidential aspirants like Bola Tinubu, Senator Rochas Okorocha, Vice President Yemi Osinbajo, Rotimi Amaechi and others welcome Jonathan’s candidacy? The question Jonathan should be asking himself and those urging him to join APC is, does it mean that there is no credible candidate to fly the party’s flag in the 2023 presidential race?” An analyst and academic with the Kogi State University, Professor Mohammed Jibril, has queried.

To some analysts, those secretly pushing to conscript Jonathan into the 2023 presidential race seem not to know that their move represents a clever political gimmick to rub in the fact that the APC has failed to move Nigeria forward in the past seven years.

However, popular views are that the move should be seen as evidence that the North is not comfortable to be out of power for a long time.

“Although it is debatable if Jonathan is still eligible to contest the presidency going by recent amendments in the constitution. But those seeking a Jonathan presidency know that if he falls for the temptation he could only serve for just one term so that power returns to the North in 2027.

“Again, it also shows that the powers that be in APC are determined to put the presidency beyond the South East. In achieving their motives, the power brokers settled for Jonathan whose candidacy could easily get Buhari’s nod,” a source within the APC circle told 21st CENTURY CHRONICLE.

He further said Buhari had a lot of respect for the former leader and had demonstrated such a number of times.

Among the reasons adduced for the closeness between the two leaders was the show of sportsmanship by Jonathan during the decisive moment of the 2015 presidential election by opting to concede defeat even when the outcome was not concluded.

“The president still refers to this whenever Jonathan’s name is mentioned. He still expresses amazement over the development that Jonathan had the power to turn around things and refused to concede but took the path of honour by accepting defeat,” he explained.

He added that it was as a result of the trust between the two that led to Buhari’s nomination of Jonathan to various regional peace initiatives, including his appointment as Special Envoy of the Economic Community of West African States (ECOWAS) to lead mediation talks in Mali.

“Asking Jonathan to join APC in order to get the presidency is the equivalent of asking him to commit a political sin by doing to former Vice President Atiku Abubakar; ex Senate President Bukola Saraki; Sokoto State Governor, Aminu Tambuwal; and Minister of Transportation, Rotimi Amaechi; what they did to them and PDP in 2015.

“Jonathan would be the worst leader in Nigeria’s history if he decides to join the same party that marketed him as an inept leader,” Prof Jibril noted.

21st CENTURY CHRONICLE recalls that before the 2015 general elections, Jonathan was described as a clueless and drunken sailor. He was also accused of lacking the requisite competence and capacity to govern Nigeria. A former Lagos State Governor, Babatunde Raji Fashola, had declared that it would take a responsible government just six months to fix the country’s epileptic electric power supply.

On the score of security, one of the three planks of change promised by Buhari and APC was the fight against insurgency. They swore that three months after taking office Boko Haram would be history. But, seven years down the line insecurity has become a new normal in the country, with banditry and mass abductions becoming daily occurrences.

Professor Yusuf Ali Zoaka of the Department of Political Science, University of Abuja, also said agreeing to join the APC by Jonathan would dent his enviable image and destroy his political career completely.

Prof Zoaka said, “The move to join the race is a political gamble because the constitution does not support anyone who has been sworn into the office of president a third opportunity. This apart, he will only destroy his reputation.

“It will certainly affect his acceptability rating because most of his admirers will be disappointed while those that want to damage his reputation will now have the opportunity to do so.

“My candid opinion is that Jonathan should maintain his reputation and stay off the ball and provide an opportunity to another Southerner to exhibit his leadership potentials and who may get the country out of the woods.”