9 African leaders who ‘succeeded’ their fathers

by Musa Umar Bologi
in Lead of the Day, News International
0 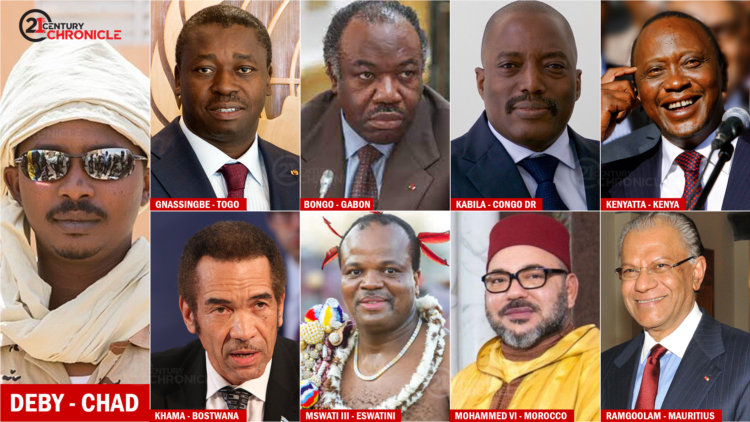 Here is the list of African leaders who succeeded their fathers. While six of them came to power immediately after their fathers’ death, those in Kenya, Mauritius and Bostwana came years after their parents left power.

Faure became Togo’s President in 2005 after the death of his father, Gnassingbé Eyadema, who was President from 1967 to 2005.

Faure became president at the age of 39. He is still in power.

Joseph succeeded his father Lawrence Kabila on January 16, 2001. He was 30 years old when he was sworn-in 10 days after the assassination of his father. Joseph ruled DRC till 2019.

Ali became the country’s ruler in 2009 after his father, Omar Bongo Ondimba’s death. His father was elected president in 1967.

Mahamat, 37, succeeded his father Idriss Deby Itno who died Tuesday from gun wounds sustained in the frontlines with the battle with rebels on April 20, 2021.

Deby died at the age of 68, after ruling the country for 31 years.

He belongs to the Alaouite dynasty and ascended to the throne on 23 July 1999, at the age of 36, upon the death of his father, King Hassan II. He has been on the throne since then.

Ian, the second son of his parents, became President of Botswana at the age of 55.

Navin was elected 13 years after his father Dr. Seewoosagur Ramgoolam, the 6th Governor – General of Mauritius.